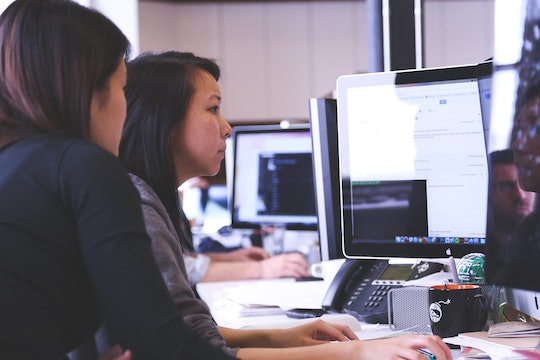 This Is The Exact Age The Gender Wage Gap Starts, According To Science

Not only do American women get paid less on average than similarly qualified men, but the gender wage gap actually gets worse as a woman ages, according to a new report. And sadly, it’s possible to pinpoint the exact age the gender wage gap starts for women in the workforce. While women in their 20s can expect to make about 90 percent of the average salary of their male peers, from age 32 onward that ratio begins to widen, according to workforce analytics firm Visier. And by age 40 — just when many women might expect to hit their stride in terms of work experience, family planning, and professional prospects — the gender wage gap typically deepens to around 82 percent. So, on this issue at least, sexism and ageism go hand and hand once again.

The gender wage gap — the idea that (white) women can expect to make an average of 79 cents to every dollar brought in by a similarly qualified man — has to be one of the most frustrating issues that feminism is addressing today. Not only is the very existence of a pay gap fodder for debate (even though it’s been proven over and over), opinions on the factors that drive it can run the gamut from individual choice to outright discrimination.

It turns out the truth is far more nuanced. Looking at pay data for more than 165,000 employees from 31 different companies between Nov. 1, 2014 and Oct. 31, 2015, Visier found that, though women and men received promotions at the same rate, older women were far less likely to actually hold managerial positions. And since managers earn on average twice what non-managers might, Visier said in its report, the disappearance of 30-something women in managerial positions could help to explain pay disparities.

And why do women suddenly disappear from management roles after age 32? Unsurprisingly, that’s also right around the time that many women leave the workforce because of childcare demands, according to the study. According to an NPR report, the age of the average first-time mom has risen to around 27 years old, and the number of women waiting until their 30s to have children is climbing. And since those kids wouldn’t enter school until five years later, women are more likely to grapple with child care demands until around age 39. And as many women would attest, those demands can certainly have an impact on career decisions.

So what’s the remedy? For one, employers have to start taking the issue seriously, according to Visier. “Every CEO should be looking at gender equity,” said Visier CEO John Schwartz in a press statement. “It turns out that gender inequity is not just a compensation issue. It is a problem of unequal participation of women in the higher paying managerial jobs.”

The report outlined several potential strategies to close the management gap, including requiring managers to consider women and minorities for every position, to screen interview candidates without gender or racial identifiers, and to promote paid parental leave opportunities to both mothers and fathers.

Schwartz added, “Having a child shouldn’t undermine the earning potential of women, but our study shows that it still does.”