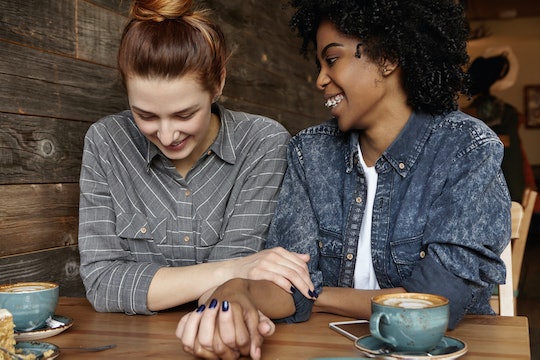 This Joke We Make About Trying To Conceive Is Archaic & Homophobic

When you reveal that you're trying to get pregnant, you'll get some kind wishes, while other people take the moment as an opportunity to launch into a well-worn comedy routine. If the person trying to conceive is a cisgender woman partnered with a cisgender man, folks seem to think they know exactly what "trying to conceive" means (wink wink, nudge nudge). I've heard everything from, "Bet your husband's enjoying it!" (though as a queer mom, I wasn't on the receiving end of that) to, "This is the fun part, because you'll never get to do it again once the baby's here." All these jokes about trying to conceive rest on one basic assumption: that if you're trying to get knocked up, it means you're having lots and lots of sex. And boy, do these jokes make the merrymaker look clueless.

Getting laid and making a baby are not necessarily connected for everyone — not just for straight folks struggling with fertility issues, but also for LGBTQ people, who (spoiler alert) are not always having PIV sex to make a baby. For them, the process of TTC is a lot more complicated, and your jokes about how much sex they're having aren't helping. So, let's cut it out already, OK?

I'm a queer woman married to another person with a uterus, so getting knocked up didn't need to involve any sexy-times at all. We used a known donor and were able to perform artificial insemination at home, which basically just means that my spouse put some sperm in my vagina. But let me tell you, it wasn't the wild romp peoples' minds seem to jump to when they hear "making a baby" or "trying to get pregnant."

These jokes — vintage offerings from the "take my wife!" era — send me back in time to sex-ed class in high school. I can vividly remember sitting next to my girlfriend’s ex-girlfriend while our teacher announced that “the only foolproof way to prevent pregnancy is abstinence” and, “all it takes is one time, people!” It was kind of beautiful, because I knew for a fact (*gestures left, gestures right*) that the teacher was wrong. If you believe that gay sex counts as sex, it's actually possible to get plenty of action without running the risk of pregnancy (though there are other risks — practice safe sex, everyone!). In actuality, it doesn’t take one time to get pregnant, so much as it takes one sperm and one egg.

At 16, I was too shy — and terrified of homophobia — to point out to the teacher that gay people exist, and therefore her information was incomplete. But I’m in my thirties now, and I’ve more or less gotten over that. These days, I have no problem calling people out on their crap.

Does trying to make a baby look like a whole lot of sexy action for some people? Sure! Maybe that’s the case some people. But this leaves out many couples who use IVF or IUI to conceive — queer couples and hetero couples alike. Queer people of all different stripes absolutely do exist, and sometimes, we make babies. To assume that the word “sex” means penis-in-vagina intercourse between two cisgender and fertile people is both massively incorrect and just… messed up. It's heteronormative to the point of knocking on homophobia's door, and leaves out tons of straight folks as well.

when you joke about making babies via sexy times, you really don’t even know whose feelings you could be hurting

We may have gotten pregnant in a fairly low-tech way at home, but there's actually a lot of variety amongst people who use artificial insemination. Other families get pregnant in clinics and doctors’ offices, using varying levels of technology, and it isn’t just homos like me, either. Plenty of straight people can’t get pregnant by getting it on, and use reproductive technology to help grow their families. That's cool, and I'm really glad they have that option.

When you joke that "heh heh, babies come from doin' it" you kind of sound like an idiot, and it's just insensitive as hell.

And while LGBTQ people are certainly important, there's also straight folks with fertility issues to think of. Many people struggling with infertility would never share that with you (because it’s none of your business) so when you joke about making babies via sexy times, you really don’t even know whose feelings you could be hurting. Imagine how you would feel if you were struggling to conceive. Maybe you're using in-vitro fertilization and you're feeling anxious about your next embryo transfer. Then someone makes one of these jokes around you — or maybe even about you. I don’t know how that feels, but I imagine it’s pretty freaking painful. I was blessed to be able to conceive fairly quickly and easily when I wanted to. But that's certainly not everyone.

The book What Makes A Baby gives a lovely explanation of where babies come from — one I think many heterosexual adults could use. It says that “when grownups want to make a baby, they need to get an egg from one body, and a sperm from another body. They also need a place where the baby can grow.”

That’s it! No “when a mommy and daddy love each other very much…” nonsense required. It really can be that simple, and there's no need to even mention straight people boning to explain to a child (or anyone else) where babies come from. Babies get made lots of different ways, and that's OK!

Look, I’m not against jokes. What I’m against are repetitive, boring, unfunny jokes that hinge on inaccuracies and perpetuate stereotypes and misinformation. I think sometimes we all need to slow down and think about what we’re saying, and what it actually means. So the next time a woman says she’s trying to conceive, and you feel the urge to respond with “Oh, yeah? You getting tired” with a meaningful wink, just take a minute to think it over. Remember that you don’t actually know how she, or anyone else, is making a baby.

More Like This
The Morning Rush Is Parenting At Its Most Essential
30 Marvelous Baby Boy Names That Start With “M”
100 Pregnancy Milestone Instagram Captions For Every Memorable Moment
Can You Have Sex With Placenta Previa? Experts Explain