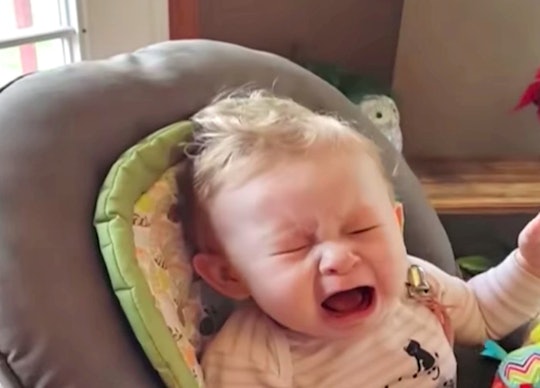 This Mom Screaming About Her Baby's First Word Is Too Much

People often joke about their parents scarring them for life, but it's not often that you actually get to watch it happen in real time. If you need a good laugh, please check out this mom screaming after hearing her baby's first word. Because it's out of control.

Usually videos of kids doing super cute things feel staged, but the shock of this mom makes it pretty clear that this was totally unplanned. In the video, the unnamed mom in question is filming her infant in a high chair, encouraging them to say "mama." At one point, the baby finally says it and the mother freaks out and starts shrieking, "Ah! You actually did it!"

The baby stares, wide-eyed, until it eventually freaks out and starts crying (because wouldn't you?). Either that infant was trying to mimic its mom's overly-excited emotions or it will never, ever, ever speak again and is traumatized forever. It's hilarious — as long as you're not the kid, of course.

Hopefully it will be appreciated later on. It's not often that you can actually catch a baby's first words, let alone have it be that epic. But any parent can likely relate to being that excitement over hearing their baby speak for the first time.

Most infants start to make vowel sounds very early on, and that cute baby babble really gets going around the four-month mark. Until then, all that crying they do? That's them talking to you in the only way they know how, most times.

The majority of new babies will start turning that babbling into actual words like "mama" or "dada" a few months after that. But every baby is different. According to Parents, you should only get nervous about their speech if you don't hear any words or vowels after 15 months.

"Toward the end of your baby's first year, he'll babble in longer strings of varied short nonsense syllables, using the intonation and rhythm mimicking that of an adult," Dr. Sherry Artemenko said. This is the first step to actual words, most of which will begin with an "m," "d," or "b" sound, like "mama," "dada," or "book."

To encourage talking, you should just always talk to your baby. You probably already do this, since it's only natural to try to make some conversation while you're all up in their business feeding and cleaning your tiny human. You can sing songs, repeat the alphabet, complain about your boss or the state of the world. (Just don't "baby talk" to them.) The more they hear the more the wheels start turning in their little heads.

And when they do talk back to you, please don't scream. They clearly don't have the emotional strength for it.

More Like This
Chrissy Teigen Revealed Her New Baby Girl's Unique Name With A Precious Family Photo
Celebrate Your Baby’s 1st Valentine’s Day With These Instagram Captions
How To Celebrate Baby’s First Valentine’s Day, From Gifts To ’Fits
Chrissy Teigen Shares First Photo Of Esti & Now We All Have Baby Fever
What Parents Are Talking About — Delivered Straight To Your Inbox