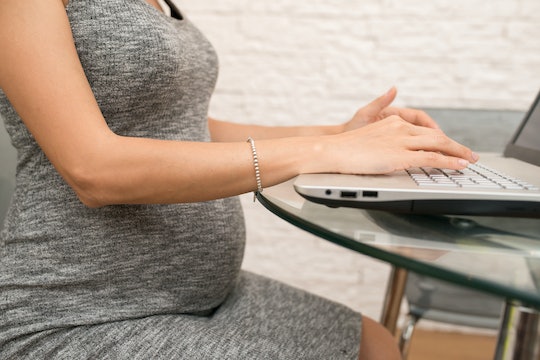 When a working person gets pregnant, they typically give their employer a heads up after they inform their loved ones and family members about the exciting news. Typically, this shouldn't be a big deal. People have the right to get pregnant whenever they chose to, right? But what does a person do when their boss has created a schedule literally outlining when it's OK for them to get pregnant? Although this scenario might be difficult for many people to imagine, it actually happened to this parent who was reportedly reprimanded by her boss for getting pregnant before her "turn," according to The Telegraph. Needless to say, this supposed incident highlights how pregnant people continue to be discriminated against in the workplace.

On Feb. 28, a major newspaper in Japan called Mainichi Shimbun published a very concerning letter in its "Otoko no kimochi" section, a phrase that roughly translates to a "a man's feelings," according to The Mainichi. Essentially, the note described an upsetting incident in which the author's wife was reportedly admonished by her employer for getting pregnant when it wasn't her "turn." Although the man didn't identify his wife's name, he did reveal that she works at a daycare center in Japan alongside other workers.

Rightfully so, the man expressed frustration that his wife's employer had created a schedule dictating when each staff member could get pregnant. Yep, some dude out there is managing people's reproductive rights via an excel sheet. Let that sink in a for a second.

Making matters even worse (yes, it gets worse) is that the author claims his wife is now being harassed by her boss for being "selfish," according to USA Today. Are you simmering with rage yet? Because I am.

The husband explained in his letter, according to The Daily Mail:

Eight months into our marriage, in January of this year, we found out that my wife was pregnant. My wife, who is a child care provider, appeared glum and anxious over the news. The director at the child care center where she works had determined the order in which workers could get married or pregnant, and apparently there was an unspoken rule that one must not take their "turn" before a senior staff member. My wife and I went together to apologize. 'We're sorry we got pregnant,' we said.

The director grudgingly accepted our apology, but since the next day, has been chiding my wife with harsh words, such as, "How could you so selfishly break the rules?" My wife feels guilty thinking about the hard labor conditions of her colleagues. I am fully aware that we are at fault for not planning well. But who benefits from having their "turn" to have children dictated, and following those rules? Child care providers sacrifice their own children to care for the children of others. It is a noble profession that nurtures children who will forge the future of this country. I respect my wife for her commitment to her profession, and continue to encourage her. The conditions of those working to nurture and care for children are evidence of a backward country.

Although some people are pointing out that the daycare's boss should be thankful that his employee is pregnant due to Japan's low birth rates, it seems like the focal point of this conversation should be about workplace maternity discrimination.

As some people might already know, Japan struggles to support its pregnant workers. The issue is so bad, in fact, that there's a Japanese term describing this phenomenon called "matahara" (maternity harassment), according to The Japan Times.

A survey conducted by Japan's Ministry of Health, Labor and Welfare in 2015 found that 47 percent of 3,500 women aged between 25 to 44 experienced maternity harassment in the workplace at some point, according to Japan Today. These pregnant women were told that they were "causing trouble" or "should retire," according to Quartz.

Of course, this lack of support for pregnant parents isn't unique to Japan. The U.S., along with countless other countries, can't seem to get it together when it comes to treating its pregnant workforce with respect. The United States, for example, is the only industrialized country that doesn't offer all of its citizens paid parental leave, according to NPR.

So, what can be done to fix this troubling trend? For starters, government officials in Japan need to create initiatives that support and encourage pregnant workers. Until then, it's likely pregnant people will continue to be unfairly discriminated against.