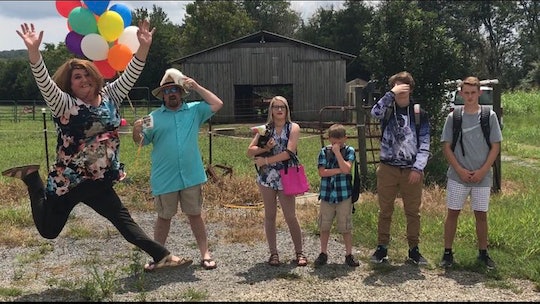 Back-to-school season calls for a serious celebration. After a long three months of children hanging out at home, complaining of boredom, and enjoying their work-free lives, almost all mothers look forward to getting their kids out of their home and back into the classroom. The end of the summer is bittersweet for children, but is one of the most exciting times of the year for parents. Yes, it's hard to communicate and capture all of those emotions, but one mom did it incredibly well. Believe me when I say that this mom's back-to-school photoshoot is both hilarious and completely relatable for all moms out there.

Alabama mom, Keshia Gardner, got everything right about back-to-school season in a staged photoshoot, which she shared on her Facebook page, with her children and husband.

In the photos, Gardner can be seen leaping out of happiness (seriously, look at that air!) in front of her children, smiling so widely she practically jumps off your computer screen. Meanwhile, her children stand behind her with their backpacks, not looking all that excited to be returning back to school. Gardner's husband also takes part in the celebration in the photo, holding onto a group of colorful balloons. In another photo, Gardner throws confetti in the air in front of her displeased children while her husband relaxes in a horse trough.

It's hard to look at the photos and not laugh hysterically and just totally relate to Gardner's joy.

These photos have become a tradition for Gardner and her family, according to Us Weekly. In fact, Gardner has reportedly been taking the celebratory, jumping-for-joy photo in front of her kids on their family farm since 2013.

While the photos are hilarious from a parenting standpoint, Gardner told Us Weekly that her kids don't actually mind taking the photos or going back to school:

They love posing. But it's always a challenge for them because they're supposed to look mad about school starting back, but they end up laughing hysterically at me jumping in the air like a crazy woman. They encourage me by saying things like "Higher! Come on! You're barely getting off the ground." They love picking on me.

Gardner explained to HuffPost, that they're a blended family "consisting of biological, step-, and foster children," with the Gardner family fostering over 40 children in the last 10 years. That sounds like a lot of hard work.

So although she may look so overjoyed in the photos, Gardner's happiness is symbolic of the hardships that parents go through during the summer. Gardner told HuffPost:

It's not because I don't love my kids, but for me, it's because we function better in a routine. Summer is hard when you work full time. Parenting is hard.

Gardner's hilarious photos and story is so relatable. The summer can be particularly hard on parents with their kids thrown out of their routines and left scrambling for something to do. So, yes, getting them back to school is a truly a reason for moms, like Gardner, to jump for joy.