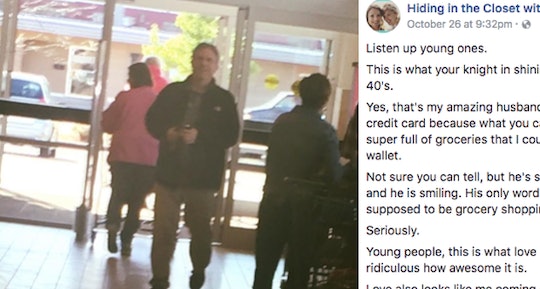 Over time, love tends to change and evolve from passionate grand gestures and wooing to established intimacy and connections that stand the test of time. And it's actually a beautiful transition, because as this mom's viral post about what makes a marriage last shows, there are many different ways partners can express their love for one another. And spoiler alert: the little things matter most in the end.

Amy Betters-Midtvedt, half of the voice behind the parenting blog Hiding in the Closet With Coffee, took to the site's Facebook page to share an honest and heartfelt story about one of the many ways that her husband shows his love for her.

Her post includes a photo of her husband, Todd, striding into a grocery store with a huge grin spread across his face. She begins, “Listen up young ones, this is what your knight in shining armor looks like when you are in your [40s]…” From there, she explains what led to this moment:

Yes, that’s my amazing husband, who is arriving on the scene with his credit card because what you can’t see is me, standing next to a cart super full of groceries that I couldn’t pay for because I couldn’t find my wallet.

This is more than just a single act of kindness, though. "Young people, this is what love looks like when you’re old," according to Betters-Midtvedt, "and it’s ridiculous how awesome it is."

The mom of five tells Romper that she was motivated to share this sweet grocery store story in part due to her two teenage daughters and wanting to show them what real-life love looks like:

I have been thinking a lot about what life tells our kids love should be like, specifically thinking about my high school daughters and the advent of "promposals" and these big gestures that they are coming to expect and how that just sets them up for disappointment.

Her experience of love hasn't been composed of these grand gestures, rather it was the little things that have made for a great marriage. "When I watched Todd walking into Aldi's after I totally disrupted his day and he was still happy to see me, I just felt like, man, this is it," she tells Romper. "Real love in action. And there are so many ways that he makes me feel loved that have nothing to do with what the world would say romance is."

In her post, she shared a number of other ways that — after 25 years together and 19 years of marriage — her husband shows his love for her. For example, he has a pot of coffee waiting for her every morning and "all the lunches being made already so I can enjoy that aforementioned cup of coffee," she explained. And even back in college, Betters-Midtvedt wrote that her now-husband would run to get her a danish she was craving or carry her flower backpack around campus.

Betters-Midtvedt's post is resonating with so many right now because, over time, relationships do change, especially after kids are in the equation. Oftentimes, though, that love transforms from romantic love to long-term intimacy, Dr. Randi Gunther, clinical psychologist and marriage counselor, wrote for Psychology Today.

As Betters-Midtvedt detailed in her post, things like having each other's backs, putting in the effort on a daily basis, little gestures of kindness, becoming parents... these are what ultimately make a marriage last — not grandiose gestures that'll get you lots of likes on social media. "That isn't the stuff that lasts," she wrote in her post. "Watch how he treats you when Instagram isn't looking. That is where the signs are."

After decades of marriage and five kids in the mix, Betters-Midtvedt and her husband are certainly doing something right. Cups of coffee and dropping off some cash at the grocery store might not be the stuff of rom-coms, but it's real and those are the things that'll matter at the end of the day.