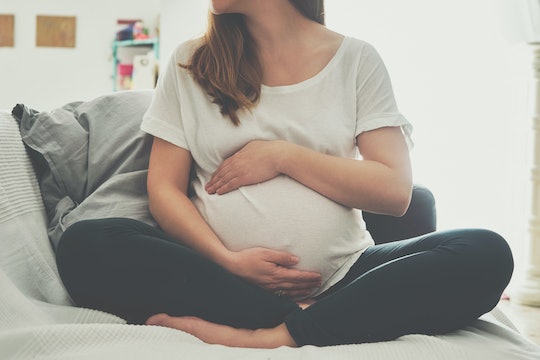 Few things frighten expectant mothers more than the idea of going into labor early. There's such risk involved, and the emotional toll can weigh heavily on a mother of a premature infant. No one wants to believe that their child might have to spend their first days or weeks in an incubator in the NICU. The science surrounding premature birth is improving, and thankfully there is new testing available to help assess your risk for preterm birth — high risk OB-GYNs want you to know that just one blood test could tell you if you're at risk for a premature delivery.

For the past several years, the gold standard of preterm birth risk assessment has been what's called the fetal fibronectin test. It's done by swabbing the cervix, looking for what is essentially the glue that holds the womb in place, according to The American Journal of Obstetrics And Gynecology. It's done a decent job, but false positives occur with minimal prompting. However, a new test — the PreTRM test for risk management — is showing real promise. It's a blood test that measures proteins that are either in too great a number or there isn't enough of them, to determine specific risk for preterm spontaneous delivery.

There is a major stumbling block with the PreTRM test, though. Because it is so new, it's not covered by insurance. This is in spite of the fact that a year long study completed by researchers from multiple universities across the country predicted a 23.5 percent reduction in infant mortality due to preterm birth. Also, they found that it was likely that the rate of acute conditions at birth would be decreased from 11.2 to 8.1 percent.

It's unfathomable to think that with numbers like that, we're still reliant upon a decades old test that something as simple as sex can throw off, according to The Mayo Clinic. 380,000 babies are born prematurely each year. It's the number one cause of death for children under 5 years old in the United States, noted The March of Dimes.

The PreTRM test is a complex blood test, and those are pricey, but if it's effective, it shouldn't matter. I reached out to one of the OB-GYNs behind the test, Howard C. Mandel M.D., FACOG. He tells Romper, “The PreTRM test is a first-of-its-kind validated prenatal blood test drawn during the nineteenth or twentieth week of pregnancy that determines an asymptomatic woman’s individualized risk for delivering her baby prematurely. This test is intended for women with singleton pregnancies (carrying one child); this translates to roughly 3.8 million women in the U.S. per year.” The keyword there is asymptomatic. According to The March of Dimes, somewhere around 50 percent of women who experience preterm birth have no risks and show no symptoms before going into labor.

The cost of care for the first year of the average premature infant is about $49,000 per child, according to CNN. That's almost $19 billion per year in costs just in the United States. The test itself costs just under $1000, and ostensibly, those costs will decline as the test gains popularity. Just under four million babies are born in the U.S. each year, which means if each pregnant women received this test, it would cost roughly four billion dollars. Even if the test only predicted half of those premature births correctly, that's still a significant savings for insurance companies.

If you can afford the test, why not get it? I would. It's one blood test that could help you figure out if you're at risk for delivering your baby early. A blood test that can answer your premature questions before you ever experience any symptoms. With that kind of peace of mind, knowing that you and your baby could be even safer than before, why not go for it?