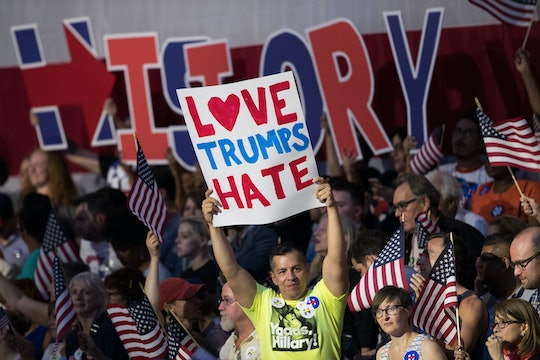 A woman made history on Tuesday night; did you notice? Having far surpassed the minimum delegate count to secure the nomination, former Secretary of State Hillary Clinton is now the presumptive Democratic nominee for president, and the first woman nominee from a major party. Ever. Hi, that's kind of important, and maybe we should talk about it, because not enough people are. This one tweet about Hillary Clinton’s nomination really drives the point home: if you care about women, you should care about Clinton's victory, even if you don't like her.

Clinton literally just made history. Our great-great-grandchildren will read about her in their robot school in the clouds one day. That's amazing! And in the same way that I'm impressed that Vermont Sen. Bernie Sanders, a kinda-Jewish, sorta-agnostic, maybe-atheist guy who certainly isn't a Christian, was able to make it this far in the election, it would be nice if he could acknowledge that no woman has ever made it this far, either, and maybe send Clinton a bottle of wine or a nice tweet or something. And former reality show host Donald Trump, who reminds us daily how much he loves women – does he care that a woman just landed the nomination?

I wanted to like Sanders, I really did. But his treatment of Clinton is getting harder to take, and his biggest advocates, the mansplaining Bernie Bros, aren't doing him any favors. Sanders says he stands for women's rights, but what about a woman's right to run for president? Months ago, his refusal to cede to Clinton seemed ambitious, plucky even. "Good for him!" I'd say to myself when he garnered a handful of delegates. But at this point, he's doing real damage to the Democratic Party, and I wonder why. Surely he knows that he'll never be president. Is he just staying in the race to stick it to Clinton, or what?

And then we have Trump, a man who claims to "cherish" women while simultaneously calling them disgusting for simply having various fluids in their bodies (even imaginary fluids). A man who refers to women as dogs or pigs. A man whose beauty pageants reinforce the notion that a woman's only worth is her ability to smile while wearing nothing but high heels and a bikini. A man who would punish women for having abortions. I could go on all day with this. The point is, Trump clearly has a big P.R. problem vis-à-vis women, and giving Clinton a quick shout-out rather than retweeting shade could have been great for his image.

Do both candidates dislike Clinton that much, that they'll actively avoid a polite comment about her that could only serve to make them look better? Or did they just not notice her accomplishment at all? Sadly, I think it's the latter. It seems that men who really believe in gender equality would at least acknowledge Clinton's accomplishment. Not doing so makes people wonder if they're really ready to put their money where their tweets and rousing speeches are.