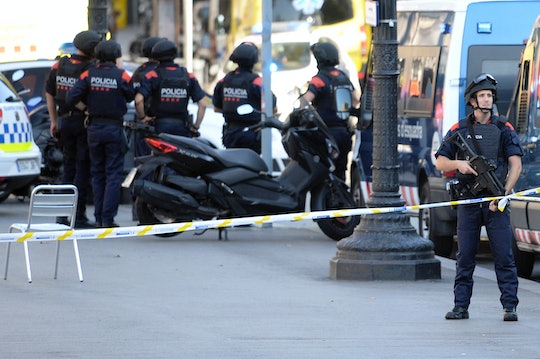 With news coming out of Barcelona that the van crash that plowed into "dozens of people" in the city center was most likely terrorism, people are already beginning to shout their xenophobic comments from the rooftops. But this one tweet about the Barcelona van crash highlights a huge hypocrisy problem among those who "condemn all terrorism," and the angry replies to it prove why it's so necessary.

Name any attack on any city, event, or place, and you can most likely label it terrorism. According to Merriam Webster, terrorism is defined as "a systematic use of terror especially as means of coercion." It's a broad definition, but it's supposed to be. It's not really a gray or white area — if you look at any incident where there is a use of terror, whether it be from a van literally driving into people or a group of people in riot gear carrying sticks, and it's an organized effort, it's terrorism.

But nowhere in that definition are the words "Islam" or "Muslim." Yet every time there is news of a terrorist attack, the world is immediately abuzz, with the loudest voices yelling the most heinous conclusion — that it's obviously the work of Muslims and obviously all of Islam is a terrorist group.

When the script is flipped, however, the hypocrisy knows no bounds.

According to The Associated Press, Spanish police are calling the crash in Barcelona a terrorist attack with local media reporting that 13 people have been killed. But no suspect has been confirmed yet. Nobody knows who is actually behind the attack, yet that hasn't stopped an alarming amount of people from blaming Muslims and the entire religion of Islam.

But where were these people less than a week ago when a white nationalist rally turned violent and a man literally drove his car — just like in Barcelona — into a crowd? Why weren't these people who "condemn all terrorism and evil" speaking out when the terrorist was a white man?

What happened in Charlottesville is, by definition, terrorism. But the above tweet proves that not everyone agrees and the hypocrisy is honestly terrifying. The van crash in Barcelona hasn't even been linked to a terrorist group yet, but that doesn't stop the xenophobic comments on Muslims and Islam, lumping them all together as one evil group rather than the individuals they are. Yet these same people, the ones who absolutely claim to "not be prejudiced" and to "hate all terrorism," are also the ones shouting that what happened in Charlottesville shouldn't represent all white people.

And it shouldn't. But no act of terrorism should represent a group of people unless that group is also evil, hateful, and intent on "a systematic use of terror especially as means of coercion." So, you know, groups like white supremacists who truly believe white people are the superior race and groups like ISIS — those are terrorists. All Muslims? No. All white people? No.

Unfortunately, there aren't enough tweets in the world to convince everyone. In response to this above tweet, the user received plenty of replies like "the Charlottesville attack was not a terrorist attack, stop puting out FAKE NEWS!!!!!" proving that there's really no way to win. Until people begin to see their own hypocrisy and their own prejudices, all anyone can do is continue fighting the good fight. And for all of us, that fight should be against evil, not against a certain group of people.