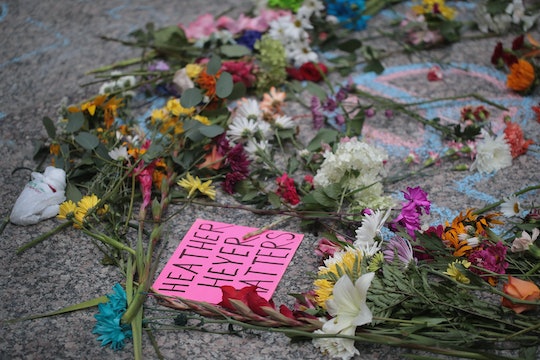 On Wednesday afternoon, scores of people — in fact, over a thousand — attended the memorial of Heather Heyer, the young woman who was killed at a white nationalist rally in Virginia over the weekend. At her funeral service, Susan Bro, Heyer's mother, spoke words that rang defiant and strong. But it was this one quote from Heyer's mom at her memorial service that served as a reminder that the responsibility for changing today's hate lies with all of us.

"They tried to kill my child to shut her up," Bro told the crowd attending the memorial, which was filmed by ABC News. "Well guess what? You just magnified her."

Bro teared up as the room broke out into applause.

In a speech that seemed determined to continue that legacy, Bro then asked attendees to step up and take true accountability for the startling events currently unfolding across the United States. She pointed out the many ways Americans around the country had turned their shock and outrage at Heyer’s death into positive action — such as blood drives, peaceful rallies, and the initiation of difficult conversations.

“You need to find it in your heart that small spark of accountability," Bro said, according to ABC News. "You poke that finger at yourself like Heather would have done, and you make it happen. You take that extra step. You find a way to make a difference in the world."

She urged people to look inwards and ask themselves, "What can I do?" in light of her daughter's death, rather than reacting with further anger and division. In a time when it's all too easy to meet hate with more hate, responding with compassion can be a difficult reaction. However, as Bro told CNN on Monday — according to HuffPost — about the man who killed her daughter:

I believe that he thought hate was going to be the answer and that hate is going to fix things. But he was wrong.

Bro finished her speech with a heartbreaking — and powerful — line: "I'd rather have my child, but by golly, if I have to give her up, we're going to make it count," she said, before leaving the stage. Without delay, her words were met with thundering applause from a crowd on its feet, for both Heyer and her mother.

(To watch the entirety of Bro's beautiful speech, watch C-SPAN's coverage on YouTube.)