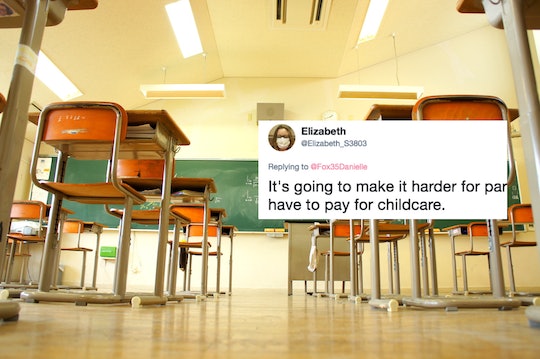 The concept of a four-day school week is by no means new, but it appears to be gaining steam across the country. Particularly in rural areas with lower populations; the four-day school week has been lauded as a potential savior to rural schools that might otherwise be closed down due to lower enrollment numbers. Sending kids to school just four days a week might seem like the solution to several education issues to some, but not everyone is on board. This week it was reported that one school district is switching to a four-day school week and parents really have some feelings about it.

School district 27J in Colorado, the largest school district in the state which serves 18,000 students, announced on Monday that it plans to implement a four-day school week for the 2018-2019 school year, according to The Denver Post. The decision was reportedly made based on budgetary concerns after the district was unable to come up with an alternate solution to bridge its 20 percent budget gap in January, the publication reported. Moving to a four-day school week is expected to save the district a full $1 million annually, mostly in transportation, substitute teacher, and utility costs, according to Fox 59.

Superintendent Chris Fiedler maintains that students will spend the same amount of hours in school and will have longer days from Tuesday-Friday with Mondays off, as reported by Fox 59. Fielder also said in a statement on Monday, according to CBS News, that the four-day work week will allow teachers to be better prepared for time in the classroom. But some parents are already worried about the change.

Some parents will have to try to figure out childcare for Mondays come the fall, and this could be prohibitive to lower-income families or single-parent households. Even subsidized childcare still costs money, and adding four extra days of childcare every month could prove to be a serious problem.

Then, as some expressed on social media, there is the issue of quality education. If children are going to school one less day a week, will their education suffer?

Fielder said that he understood parents' concerns, according to a statement, as reported by Fox 59:

I realize this will be a significant change for our students, their families, and the communities we are so fortunate to serve, but our district can no longer be expected to do more with less financial resources. We are 100 percent committed to providing our students with the necessary skills and competencies that will enable a future far beyond graduation. To that end, I believe it is in our students’ best interest to provide high quality, engaged teachers using 21st Century tools for learning four days a week rather than not have them five days a week.

After surveying more than 700 families in the school district, public information officer Terry Rudnick reportedly said, according to Fox 59, that officials were aware that childcare could be a serious issue for some families. With that in mind, childcare will be provided at several schools on Mondays at a cost of $30 per child, as reported by Fox 59.

School district 27J is the first metro district to announce it would be adopting the four-day school week, but in reality 55 percent of schools in Colorado have already been doing it for awhile, according to Brookings. Several other states are also working with the four-day school week, including 43 in Idaho, 30 in Oregon, and nearly half those in Montana, and 88 in Colorado, according to Brookings. To date, the risks and benefits of a four-day school week have proven somewhat inconclusive, according to a report by The Atlantic. While many districts like to tout the cost-saving benefit, whether or not the savings will work in the long run has yet to be seen since the concept is so new, the publication found.

As with anything in the early stages of implementation, changing to a four-day school week will probably not be without its problems. But if it really does help rural schools stay open and afford teachers more prep time.... perhaps it will be a good thing in the long run.