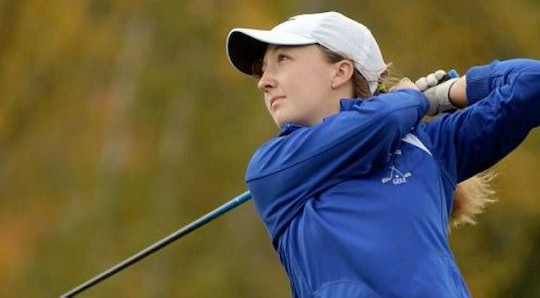 This Teenage Girl Who Won A Boys' Golf Tournament Was Denied A Trophy. Yes, Really.

When Emily Nash decided to play in the Central Mass Division 3 Boys' Golf Tournament in Massachusetts on Tuesday, she likely didn't know the firestorm she'd set off when she won. The teenage girl beat all the boys at the golf tournament, but was denied a trophy reportedly because of the rules — rules that meant a girl golfer, like herself, couldn't enter and win a trophy as an individual. So despite beating a male golfer who was four strokes behind her in the game, Nash went home without the first place prize.

According to the Massachusetts Interscholastic Athletic Association, girls can play in this boys' golf tournament as part of a team, but they can't be entered as individuals. Nash competed with the boy's team at the tournament, because her school doesn't have a girls' team. That's why even though Nash showed up and beat all the boys, she walked away without a trophy in the end, according to NPR.

The MIAA did not immediately respond to Romper's request for comment.

Emily scored a "stellar 75" in the tournament, according to PGA.com, the Professional Golfers' Association's website. But even with her score, her Lunenburg High School team's total wasn't good enough to qualify for the state tournament, so she won't be competing in that event. She would have qualified as an individual for that state competition with her victory, if not for the rules of the tournament. That's like being part of a group project in school and knowing you had the best finished product in the end, only to get a "B" because of your group members' projects.

The 16-year-old golfer apparently didn't know she wouldn't get a trophy if she won, but her coach was aware of the rule. She reportedly told local TV station WPBF, "I feel like it's a bit unfair."

"A bit unfair" is generous, really. Plenty of people agree that Nash should have gotten that award and been allowed to move on to the state tournament. Robert Dufresne, a volunteer rules official with the Massachusetts Golf Association, which helped oversee Tuesday’s tournament, told The Worcester Telegram & Gazette:

It’s a real injustice that she wasn’t announced as the winner.

T.J. Auclair, a writer with PGA.com, wrote that "Nash's score which was the best in the field by four strokes, was OK to count toward the team effort, but not OK to count individually?...It's 2017. This rule sounds like it was created in 1917."

And he could not be more correct. It's blatantly sexist that Nash was able to contribute to her team's score but not receive an award she would have been given for her efforts as an individual athlete if she were a boy.

Nash won the tournament with an impressive score. The tournament runner-up and her teammate, Nico Ciolino, even offered Nash the trophy after he was awarded it, and said that she was the one who earned it, according to Rolling Stone.

Now, if Nash wants to compete and win as an individual, she has to wait for the girls' championship in the spring, instead.

The MIAA released a statement about the situation, which read:

The MIAA and its member schools congratulate all golfers on their performance at the recent fall sectional team golf tournament. In particular, the skill of the female golfer from Lunenburg was on display as she represented her personal ability and effort on behalf of the Lunenburg High School Boys Golf Team. The MIAA is proud to have her and her teammates participate and represent the 230,000+ student-athletes in our schools.

We congratulate Lunenburg’s female golfer on her performance and wish her continued success as she participates once again in the MIAA Girls Individual Golf Tournament in the spring of 2018.

But in that statement, the association didn't even use Nash's name, which didn't go over well with her supporters.

Regardless of whether Nash faced sexism at the tournament, the MIAA might actually face legal consequences, according to NPR.

David S. Cohen, a law professor at Drexel University, told NPR the rule raises concerns about Title IX. He said the law does allow "contact or skill-based sports" to be separated when it comes to gender. The truth is, the MIAA could have kept girls like Nash out of the boys' tournament entirely. But Cohen told NPR:

But ... once they say, 'We're going to let girls participate,' they're required by Title IX to treat them equally. And denying someone the trophy and the championship is far from treating them equally.

Nash deserved to be treated and rewarded equally for her amazing athletic performance and clear win in the tournament. Even though she wasn't awarded adequately this time, something tells me she won't give up anytime soon, and that this won't be the last time we hear about this talented young golfer.

More Like This
Brooke Shields On Why We All Need To Talk About Aging In A Totally Different Way
Operation Fly Formula Begins With 78,000 Pounds Of Baby Formula
What Is Monkeypox & Should You Be Worried? Here’s What You Need To Know
Chris Pratt & Katherine Schwarzenegger Welcomed A Baby Girl With The Prettiest Name