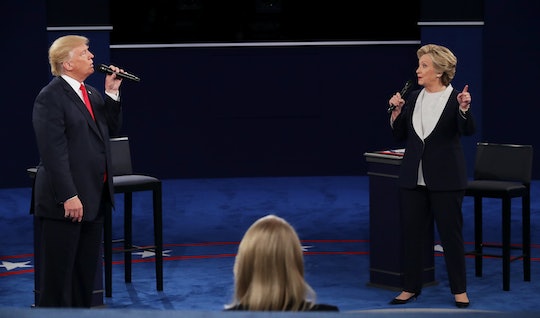 This 'Time Of My Life' Debate Lip Dub Is Spot-On, Plus 10 More Hilarious Duet Memes

Many American voters were disappointed to learn the second presidential debate, hosted by Martha Raddatz and Anderson Cooper on Sunday, wouldn't have a split screen like the first debate did. How are we supposed to know when Donald Trump rolls his eyes or Hillary Clinton shimmies? But nobody could have predicted how perfectly the town hall setup would lend itself to this "(I've Had) The Time Of My Life" lip dub, and other hilarious duet memes.

Clinton and Trump were both provided with tall stools and handheld microphones, much like stand-up comics. And just as comics do, they both choose to eschew the stools in favor of pacing about the stage. And since at least one of the candidates believes that a political debate is all about interrupting and talking over your opponent, that led to a lot of screen time with both of them simultaneously wandering around the stage together, holding their microphones. You probably know where this is going, even if you didn't spend Sunday night on Twitter: duet memes. So many duet memes, each of them funnier than the last. And while still photos lent themselves more easily to the joke, some evil genius actually edited video that made the pair look like they were singing the Dirty Dancing theme.