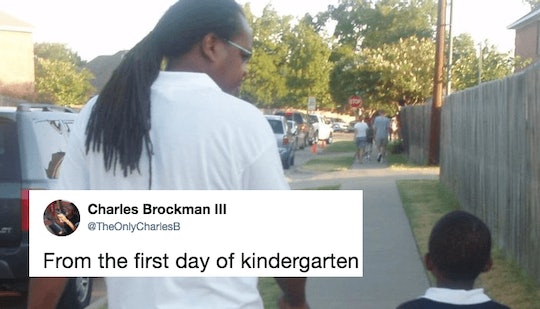 The first day of school, especially kindergarten, is a huge milestone for families. For parents, sending their child to school for the first time is akin to the moments of pushing the baby bird out of the nest: It's the only way they're going to learn how to fly, no matter how emotionally tough it might be. For kids, the thought of starting such a huge new endeavor without mom or dad there the whole day can be terrifying — and exciting. That's what makes this viral photo of a dad walking his son to kindergarten on his first day so amazing — because it's also paired with a photo of that same father walking his son into his college dorm on move in day.

According to The Houston Chronicle, Charles Brockman III and his father are from Plano, Texas, and the younger Brockman just started his freshman year at Mississippi State University. An accomplished athlete, Brockman will compete on the university's track and field team. Brockman posted the pair of photos to his Twitter account on Sunday. "From the first day of kindergarten to college move in," Brockman captioned the photos. "Thank you dad."

Brockman told Dallas News there was no hesitation to show his parents just how much their support has meant to him. "I'm blessed to have two parents that are still in my life that support me through everything I do when other people, sadly, can't say the same thing," Brockman said. His parents, Charles Jr. and Sherry, have been cheering from the sidelines for their son, who hopes to run for the U.S. Olympic track team at some point.

Even his school couldn't resist how amazingly sweet and touching this little nugget of humanity was on Twitter, with the official MSU Twitter account replying, "What a heart-warming story. Thanks for sharing, @TheOnlyCharlesB. Welcome to MSU."

As if Brockman's tweet wasn't ugly-cry inducing enough, his comments to Dallas News about what life will be like once his parents leave on Wednesday are a straight up punch to the gut. "It hasn't hit me yet because they're still here, but I know it will hit me soon," Brockman said on Tuesday. "I'm happy they raised me to be who I am. But I know I got growing up to do." Not going to lie: That is refreshingly self-aware and compassionate for a 17-year-old.

That we should all be so lucky our kids turn out to be as humble, grateful, and awesome as Brockman.