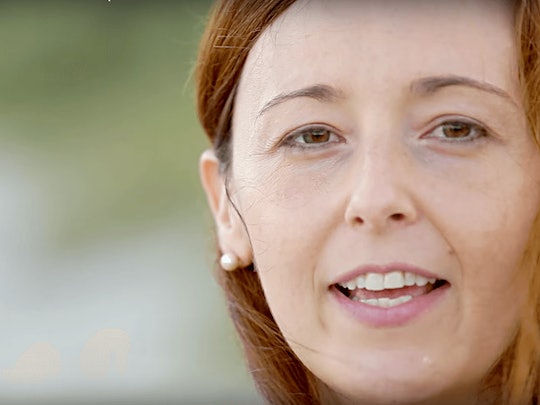 This Woman Got Pregnant Via IVF After Her Husband's Death, & Her Story Is Important

It's not uncommon to hear the story of a pregnant widow giving birth to a child after the death of her husband: She's already pregnant, something happens and her husband dies, and then she gives birth. But for Kristen Tripson, her story is far more incredible: After her husband died of cancer, she got pregnant — with his child no less — thanks to to IVF. Hers is a remarkable story. The 34-year-old Tripson raised two children, a boy, 5, and a girl, 2, along with her husband Sam, 33 years old, who lost his battle to lymphocyte-predominant Hodgkin lymphoma in September 2015.

In an interview with Us Weekly, Tripson revealed that she and Sam underwent IVF in 2012, freezing their embryos so they could still expand their family after Sam was finished with cancer treatment. The expectation was that Sam would be cancer-free and he and Tripson would build their family together once he recovered. Tragically, that didn't happen. In a now-protected Instagram post, Tripson wrote, according to Us Weekly:

Though we never talked much about ‘the end,’ we did talk about our embryos. I know it’s a very personal, private subject, but to us, they were our potential children. On ice. It was always our plan, regardless of what happened, that they would have a chance at life.

As unbelievable as Tripson's story seems, it's not medically or scientifically impossible thanks to advancements in assisted reproductive technology and embryo cryopreservation and vitrification. The technology has come a long way with regard to how embryos are frozen, with "flash freezing" technology called vitrification offering success rates comparable to the "slow freeze" techniques involved with cryopreservation. Recent research out of Australia's University of New South Wales suggests that using frozen embryos has comparable success rates to using fresh embryos when going through IVF.

Tripson's story highlights one of the less visible aspects of IVF treatment — what to do with excess frozen embryos. When you're in the thick of an IVF cycle, it can be hard to visualize anything beyond those precarious weeks of cycling, let alone one or two years after treatment is over. Some couples sign their consent form — a form that outlines what will happen to excess embryos and given at the very beginning of treatment — without really taking the time to think about what happens after.

When my husband and I underwent IVF in 2012, we had to be more intentional and thoughtful about the possibility of excess embryos. The reason for all the careful planning was due to the fact that we worked with an egg donor known to us, so, for legal reasons, we had to draft an egg donor agreement that spelled out exactly what would happen to those excess embryos created especially for us. If we divorced, they would be destroyed. If, God forbid, I died, they would be destroyed. If, God forbid, my husband died, however — they would remain frozen and in my possession to do with as I wanted. While I don't like delving into the morbidity of such a scenario, I can see why choosing to have my husband's child after his death could seem like a real possibility.

Similarly, Tripson and Sam came to an agreement before his death, and she had no intention of going back on their plans: "Even in ICU during his final hours, I knew what I was going to do," she posted on Instagram. "Of course, it's bittersweet. And yes, a bit unconventional. But it was our decision and what I consider to be one of life's most beautiful blessings."

Despite the tragedy of her husband's death, Tripson's extraordinary story illustrates to every family out there a tremendous testament to hope, love, and the enduring power of family before all else.