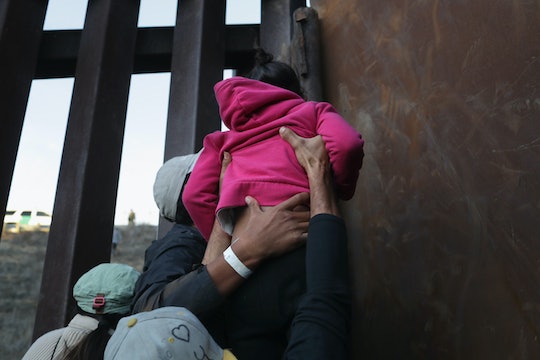 Report: Thousands Of Unaccounted Migrant Children Were Separated From Parents

As the government nears its fourth successive week in partial shutdown, the standoff between President Trump and congress over whether or not funding for the border wall between the U.S. and Mexico will be approved rages on. On top of it all, thousands more migrant children were allegedly separated from their families than was originally reported, only intensifying the situation further.

According to a new report from the Health and Human Services inspector general's office, nobody is really clear on just how many children are being separated from their guardians at this point.

"The total number of children separated from a parent or guardian by immigration authorities is unknown," the report claims. "Pursuant to a June 2018 Federal District Court order, HHS has thus far identified 2,737 children in its care at that time who were separated from their parents. However, thousands of children may have been separated during an influx that began in 2017, before the accounting required by the Court, and HHS has faced challenges in identifying separated children."

It's a pretty terrifying reality, one that does not speak well to the current administration's efforts to continue separating families until more strict immigration regulations are completely enforced — with a wall, or not.

As for why more strict regulations don't exist to account for all families separated? Well, the report claims that there was a sharp increase in the number of individuals being detained, and they simply did not yet have a plan in place to handle it.

"According to ORR officials and staff, in the summer of 2017, staff observed a significant increase in the number and proportion of separated children (i.e., children separated from their parent or legal guardian by DHS) relative to other UACs," it read, continuing:

Staff had begun informally tracking separations in 2016, recognizing that additional information and effort was required to locate parents of separated children. Although this tracking was not comprehensive, it provided adequate information to alert ORR intake staff to significant trends. ORR officials noted that, according to this tracking, the proportion of separated children rose from approximately 0.3 percent of all UAC intakes in late 2016 to 3.6 percent by August 2017.

Lee Gelernt, the deputy director of the ACLU's Immigrants' Rights Project, reportedly filed a lawsuit against the separation policy, USA Today reported, saying: "This policy was a cruel disaster from the start. This report reaffirms that the government never had a clear picture of how many children it ripped from their parents."

Of course, this is a particularly tense topic given that there have been reports of immigrant children literally being kept in cages during detainment.

In July, The Guardian reported on the unseemly conditions in which children were being held. AP News later reported: "One cage had 20 children inside. Scattered about are bottles of water, bags of chips and large foil sheets intended to serve as blankets." AP also reported that, at the time, over 1,100 individuals were being kept in the holding facility, a number which rose to over 2,000 in a short period of time. It's now unknown how far its gone.

Democratic Sen. Jeff Merkley of Oregon said, according to AP: "Those kids inside who have been separated from their parents are already being traumatized. "It doesn’t matter whether the floor is swept and the bedsheets tucked in tight." Romper also previously reported on the devastating psychological impact and long-term consequences kids can experience when they are taken from their caregivers.

Be that as it is, it's clear that there's still no resolution for the border wall in sight, and in the process, some of the most vulnerable among us are paying the collateral.