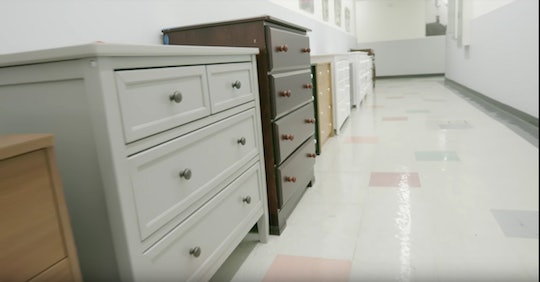 Tipping Furniture Injuries Are On The Rise, Report Finds, & Here's What Parents Need To Know

When it comes to baby proofing, there are areas of the house that people don’t automatically realize need inspection. It’s common to block stairs and baby-proof any low cabinets and electrical outlets, but dressers often get overlooked. After all, it’s assumed that a heavy dresser is stable; it’s sitting solid on the ground and it seems like it'd be impossible for a baby to move it or pull it forward. But, according to the Consumer Product Safety Commission, estimated tip-over injuries for children are on the rise and there are no laws in place right now to prevent such tragedies.

A “tip-over” is pretty much what it sounds like; it’s when furniture can’t stand stress after a certain point and tips. While there had been a few years of decrease in children tip-over injuries, the 33 percent increase saw injury numbers rise from 2,100 to 2,800 from 2015 to 2016, according to Consumer Reports.

For some, a tip-over can just be a frightening reminder, but for others, the impact can unfortunately be deadly. Of those 2,800 injuries, 195 resulted in death between 2000 and 2016, according to People. Overall, that means a furniture tip-over kills a child about every two weeks in the United States, the publication reported.

Right now, the industry reportedly only has to abide by a voluntary tip-over testing standard. According to Consumer Reports, this means any dresser taller than 30 inches should stay upright with 50 pounds of weight hanging from an open drawer. Remember, though: this test is voluntary. That means manufacturers aren’t actually required to conduct the test or even meet the standard in order to sell their dressers in the United States, as the publication reported.

Consumer Reports launched its own investigation to assess the stability of dressers in the marketplace. While the majority of dressers tested passed its 60-pound test (a 10 pound weight increase, in order to more accurately represent a child’s weight), Consumer Reports noted that the industry standard is inadequate. “Clearly, the marketplace has found that one can design a dresser at various prices that is safer and more stable,” James Dickerson, Consumer Report’s chief scientific officer, said in its report.

So, if that’s the case, why haven’t they committed to it? There isn’t one perfect formula for greater stability, at least not on the market. But, Consumer Reports noted that many of the dressers that passed its tests are heavier, backed weighted, and deeper dressers with less drawer extension. However, there’s no way for consumers to eye a dresser in the store and determine whether it’s likely to tip. In order to know for sure, testing needs to be changed from voluntary to completely mandatory, with a more efficient standard produced, as Consumer Reports recommended.

Currently, there are furniture anchors available, which involve anchoring dressers to the wall using straps. But, for some, that solution is still lacking. If there are brick walls in the house, for example, a family can’t simply screw a strap in; others simply aren’t proficient enough with tools to feel that those straps are a guarantee. In addition, Consumer Reports found that some parents didn’t even know furniture anchors existed.

To some manufacturers, meeting a new standard wouldn’t be a simple adjustment. Joe Shamie, co-president of Delta Children, told Consumer Reports that a new standard would mean redesigning dressers and probably additional per-unit costs. “As it is right now, my costs are more expensive than the guy that does not pass the [voluntary] standards,” he told Consumer Reports. “If they make the [voluntary] standards tougher, my costs will continue to go up, while his costs will continue to be much lower than mine.”

While manufacturers argue that burden has to rest with the parents, the reality is that children do things we don’t expect. But, that isn’t an excuse to slack on safety standards. Consumer Reports noted that implementing a mandatory, 60-pound standard would cover about 95 percent of American children younger than 6 — a group involved in 82 percent of tip-over deaths, according to the U.S. Consumer Product Safety Commission (CPSC).

In efforts to confront the tip-over epidemic, the CPSC launched “Anchor It!”, a national public education campaign. For any parents currently wondering what they can do, the CPSC recommends the following:

The CPSC recommends that televisions are only placed on furniture designed for it, such as entertainment stands.

Any televisions that aren't wall mounted should be anchored to the wall or stand using an anti-tip device. Even if a dresser is unable to tip over, the stress of a child on the drawers can send an unmounted television over the edge.

Older TVs Should Be Placed On Low & Stable Furniture

Older televisions with a heavy and bulky backside, also known as CRT televisions, should only be placed on furniture designed to hold a television, and should be anchored to the wall or the TV stand. Placing them high up on furniture increases the risk of injury if there's an accident.

As mentioned earlier, furniture can be stabilized with anti-tip brackets, and some new dressers are even sold with them. In the case of top heavy furniture, if it's impossible to redistribute weight in the bottom drawers, it's especially important to make sure they're secured to the walls.

Any items that kids might be tempted to retrieve, such as toys or remote controls, should be left off the top of dressers. It might be tempting to place items high so kids can't lose them, but it's better to eliminate any temptation for a child to start climbing on furniture.

This isn't the time to improvise, so make sure to follow the manufacturer's instructions to secures TVs and furniture properly.

Along with following those tips, Consumer Reports has released a petition asking the furniture industry to adopt new standards, which includes testing units under 30 inches as well. As it stands, tip-over deaths and injuries are largely preventable tragedies and until there are new standards, it's important for parents to be aware of these dangers and combat them as best as they can.