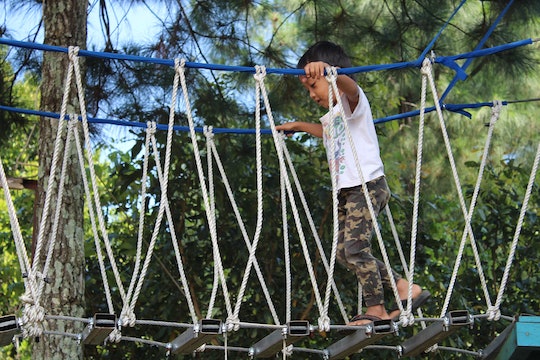 In this back-to-school season, it's easy to focus on whether or not your children have the right school supplies, or if their teacher is fully recognizing them for all their wonderful qualities. But a new study shows that an important health issue may be getting lost in the shuffle. According to the research, too many preschoolers aren't following obesity-prevention guidelines — and it's time to change that.

The upsetting study on childhood obesity comes from the Cincinnati Children's Hospital Medical Center, which followed almost 400 Ohio preschoolers over the course of 24 hours to track their physical activity and what they ate — both at school and at home — through parent documentation and fitness-tracking monitors.

Researchers focused on the 5-2-1-0 recommendations for preventing obesity. Here's how those break down: Each day, children should be eating at least five servings of fruits and vegetables. They should limit screen time to less than two hours. They should get one hour of physical activity, and have zero sugar-sweetened drinks. It doesn't necessarily sound so hard in theory, but any parent knows that it takes real effort to put into practice. After all, guidelines can seem a little fuzzy when kids are clamoring for a soda, and it seems like there's no time to go to the store and buy a bunch of fresh fruit, and you could really use a break while they watch their favorite cartoons for a bit.

So... how did the kids do when it came to following the recommendations?

Unfortunately, they didn't do so well.

Turns out that less than 1 percent got enough physical activity, only 17 percent ate enough fruits and veggies, and only about half the kids stuck to sugar-free drinks, according to the study. However, on a positive note, 81 percent of kids ended up limiting screen time as recommended, so at least there's that!

So, why does it even matter that much whether kids are following guidelines when it seems like they're doing just fine? According to the Centers for Disease Control and Prevention, about 9 percent of children ages 2 to 5 are obese. Those who are obese in childhood are much more likely than those who are not to become obese adults. But even kids who manage to stave off the outward physical effects of a not-so-healthy diet and exercise routine with that amazing childhood metabolism are forming habits that they may have a hard time kicking later in life.

So as kids go back to school, it's time for parents to do some homework, too — even though it'll most definitely be a real pain right now to get your kids to care about eating their vegetables.

But it can really pay off big time for them as they grow up.

The American Heart Association has some great tips for encouraging healthy habits in kids, like preparing blueberries or grapes as treats instead of candy, or enticing your children into a game of tag. And when in doubt, just go back to the 5-2-1-0 rule! They may grumble and groan now, but your healthier children will thank you one day.