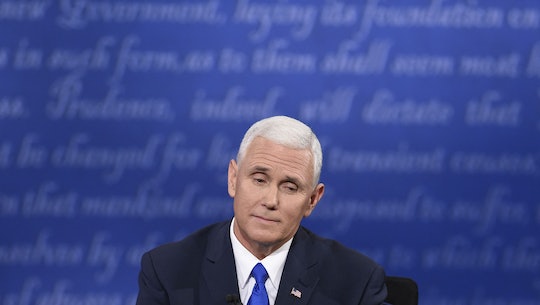 Going into the vice presidential debate, it was clear that Indiana Governor Mike Pence had a major responsibility to shoulder. After the first presidential debate, Republican nominee Donald Trump spent much of the last week answering for comments that sparked media controversy. Taking on Democratic vice presidential nominee, Virginia Sen. Tim Kaine, Pence prepared to both represent himself on the debate stage and perhaps to answer for the actions and opinions of his running mate. And the transcript of Mike Pence's closing statement shows that he committed to staying on message about making America great again.

Pence went into the vice presidential debate with the virtually-assured allegiance of his party. The Washington Post reported that the GOP may have accidentally published a post declaring Pence the winner over an hour before the event started. Despite support from his party, Pence still took on a difficult challenge Tuesday night, representing both himself and Trump in the best way possible in the aftermath of controversy. Both candidates started off in a fairly good place in terms of public opinion. According to a CNN/ORC poll, Kaine and Pence were both deemed winners by an equal number of people polled.

Throughout the debate, the two men went after each other and each other's running mates. But all eyes — and ears — were on Pence's final words. Would he nail it, potentially securing himself the win for the debate? Or would he drop the ball?

Quijano asked, "If your ticket wins, what specifically will you do to unify the country?" For his final statement, Pence emphasized the need for change in the country:

The potential is there to really change the direction of this country, but it’s going to take leadership to do it.

He also expressed his support for his running mate's vision for the United States:

When you hear him say he wants to make America great again,when we do that, I truly believe the American people are going to be standing taller.

Here's the full transcript of Pence's closing statement, as published by Vox:

This is a very challenging time in the life of our country. It has weakened our place in the world since the leadership of Barack Obama and Hillary Clinton and — an economy that is stifled by an avalanche of taxes, regulation, Obamacare, the war on coal, and trade dealers — trade deals which have put Americans in the back seat. The best way we can bring people together is to change in Washington DC. I served with many Republicans and Democrats, men and women of goodwill. The potential is there to change the direction of this country but it is going to take leadership to do it. The American people want to see our nation standing tall on the world stage again. They want to see it supporting our military, rebuilding the military, command the respect of the world and they want to see the American economy off to the races. A comeback. Donald Trump square has been about holding, coming through hardship, finding a way through smarts and ingenuity and resilience to get through. When he becomes president the United States will have a stronger America. When you hear him say he wants to make America great again, when he does that I truly believe the American people will be standing tall. They will see that real change can happen after years of talking about it. Decades. They will stand tall, stand together, and we will have the kind of unity that has been missing for so long.

Pence's closing statement circles back to many of the messages he sent over the course of the debate, as he spent much of the 90 minutes emphasizing his ability to partner with his running mate in creating a safer and more prosperous country. Though Kaine prompted Pence many times over the course of the conversation to defend Trump, Pence consistently made an effort to get back on message as fast as he could. The closing statement reflects the pragmatism that seemed to fuel Pence's entire approach to discourse Tuesday night. His reiteration of the desire to "make America great again" likely earned the respect of his party and a big thumbs-up from Trump.