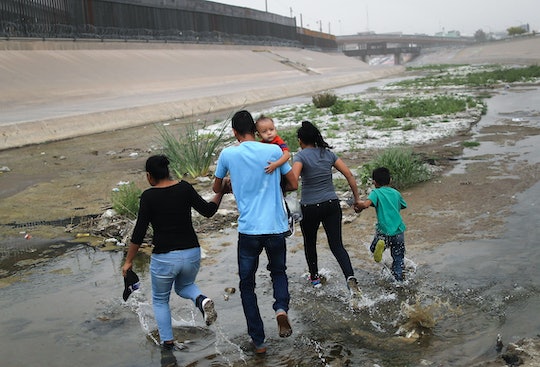 It's impossible to imagine the life of a migrant making a long, perilous trek to the United States to seek asylum — to seek a better life for themselves and safety for their children. It's something many of us who have grown up in the comfort of living in a wealthy country cannot possibly understand. The fear, the danger, the very real prospect that you or someone in your family might not make it. And that's why many are concerned about the Trump administration's new rule for asylum seekers, which could leave thousands of migrants stranded.

On Monday, July 14, the Trump administration announced a new restriction for asylum seekers making the harrowing journey to the southern border, according to TIME. Moving forward, as NPR reported, these asylum seekers will be expected to apply for "refugee status" in one of the countries they have passed through before applying for asylum in the United States. This rule is expected to be effective immediately, though it's also expected to be challenged in court, according to Quartz.

Attorney General William Barr explained in a statement that this new rule is a "use of authority" delegated by Congress, adding: "The United States is a generous country but is being completely overwhelmed by the burdens associated with apprehending and processing hundreds of thousands of aliens along the southern border."

The move caused swift and vocal backlash from national and international groups as well as politicians who consider this move by the Trump administration to be a sign of darker things to come.

ACLU deputy director of the Immigrants' Rights Project Lee Galernt said in a statement, "The Trump administration is trying to unilaterally reverse our country's legal and moral commitment to protect those fleeing danger. This new rule is patently unlawful and we will sue swiftly." The ACLU plans to challenge the new asylum restrictions in court, the organization shared on Twitter.

There are several serious issues with the new system the Trump administration is proposing for asylum seekers. As the Wall Street Journal reported, approximately 18,000 asylum seekers from countries throughout Central America who made it to the U.S.-Mexico border late in 2018 were told to wait in Mexico after they were given a number for their asylum interview. This new rule, according to TIME, would see these migrants forced to apply for asylum in Mexico, which Mexican Secretary of Foreign Affairs Marcelo Ebrard Casaubón said in a public statement could see people traveling back to countries where their lives might be in immediate danger.

"Mexico does not agree with measures that limit access to asylum and refuge for people who fear for their lives or safety in their country of origin," Casaubón said, according to The New York Times.

It seems many people do not agree with the Trump administration's new measures. Geoff Thale, Vice President for Programs at the Washington Office on Latin America (WOLA), said in statement said that "this rule change is the latest in a string of aggressive and unlawful programs proposed by the Trump administration that seek to drastically curtail the rights of people seeking asylum in the United States."

Thale continued, "Beyond the significant questions regarding its legality, this rule change also creates greater risks for migrants in transit by placing the burden of asylum protections on countries like Mexico and Guatemala."

The United Nations High Commissioner for Refugees Fillipo Grandi also noted that these new restrictions were "deeply concerning," saying in a statement on Monday:

We understand that the U.S. asylum system is under significant strain. And we are ready to play a constructive role if needed in helping alleviate this strain. But we are deeply concerned about this measure… It will put vulnerable families at risk. It will undermine efforts by countries across the region to devise the coherent, collective responses that are needed. This measure is severe and is not the best way forward.

The Trump administration is essentially telling migrants seeking asylum to go back to where they came from with this new restriction. Asking small countries like Guatemala and Honduras, places without the same sort of infrastructure as the United States, to somehow absorb thousands of asylum seekers because they happened to pass through their country.

Fortunately, amid this ongoing and heartbreaking humanitarian crisis at the border, immigrant rights group and advocates are already planning to challenge this very concerning rule.