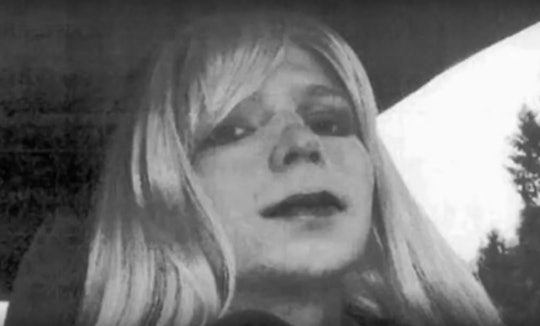 President Donald Trump will undoubtedly be remembered for many things, but one unexpected legacy may actually be a boon to society: a reminder to always check your sources. In the early days of his presidency, Trump has claimed a number of falsehoods, and it's a good reminder to never take anything at face value. On Twitter on Thursday morning, Trump called Chelsea Manning an "ungrateful traitor" and falsely claimed that Manning called President Obama "weak." She did not. The tweet appeared to be a response to an op-ed Manning wrote for the Guardian, in which she argued that Obama's attempts to compromise with his opponents had been ineffective, and called for "an unapologetic progressive leader" to fight back against the right wing.

Chelsea Manning is, to put it mildly, a polarizing figure. She was assigned male at birth and went by the name Bradley Manning. Under that name, she was a U.S. Army intelligence analyst and was convicted of espionage (among other charges) in 2013 after leaking hundreds of thousands of classified documents to WikiLeaks. After her sentencing, she came out as a transgender woman. Some call her a whistleblower, while others call her a traitor. However, many on both sides of the issue agree that her subsequent punishment was unnecessarily harsh, and just days before leaving office, Obama commuted her sentence. She is due to be released in May.

Few could argue against Manning's assertion that Obama's Administration left behind "very few permanent accomplishments." Once Republicans took control of the House in 2010 and the Senate in 2014, nearly every action Obama took was subsequently blocked. Perhaps his greatest legacy will be a lesson that midterm elections are just as important as presidential elections, and going to the polls in 2018 will eventually effect more change than rallying millions to march in pink hats, or furiously commenting "FAKE NEWS" on your cousin's Facebook posts.

But back to Trump, and his tenuous grasp on facts. Staunch supporters might take him at his word that Manning called Obama weak. Those who are beginning to question him might quickly Google "Chelsea Manning Obama" and see a few headlines noting that Manning "criticized" Obama, and take that as confirmation. But if you read the actual op-ed, the only time she used the work "weak" was in reference to criticisms Obama's opponents had offered. So where did he get that idea? Mediaite has a guess. Just 14 minutes before Trump's tweet, Manning's face was featured on Fox News, emblazoned with the chyron "UNGRATEFUL TRAITOR" while Fox & Friends First anchor Abby Huntsman claimed that Manning "slamm[ed] President Obama as a weak leader." It seems that Trump still hasn't learned what grandchildren across America have been repeating for years: Some sources are more reliable than others. Please do your research.