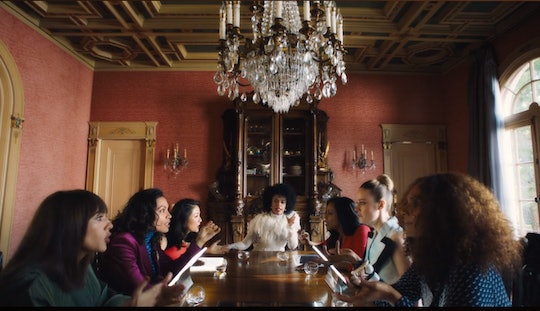 Trump References In "Family Feud" Are Subtle, So You May Have Missed Them

Who said you can't mix politics with entertainment? This year kicked kicked off with Donald Trump becoming the 45th President of the United States of America at his presidential inauguration in January. And people weren't too happy about that, including many celebrities (understandably so). It seems like JAY-Z isn't a Trump fan, either, because Trump references in "Family Feud", his new music video off of his album 4:44, while subtle, were very clear.

The music video, featuring a star studded cast, shows the United States post-Trump presidency. A lot of the details are a little hazy (Will all of the world be cast in a blue shadow? Will there really be a throne for someone to inherit?) but a few things are made clear — the future will have two presidents, a male and female, working together to work towards peace and eradicate conflict. But before the United States could elect two presidents from "two mighty families", a group of women came together in the year 2050 to rewrite the constitution, write a thing called "the confessional papers" and would become the "Founding Mothers" of the United States. Together, with their revisions, they kept the freedoms and established peace in the nation, according to the music video.

While this is a future a lot of people could get behind, it isn't what many people are seeing in 2017. The references to the current government and the family who sits in the White House are subtle in the music video, but painstakingly clear at the same time.

She and a group of women from all walks of life revised the constitution over 444 years ago, at a time, mind you, when some thought making America great meant making us afraid of each other.

But the women in JAY-Z's future aren't meant to be afraid of each other. They're meant to make peace and guarantee a future of a better United States. Nobody fights if everybody is at each other's throats. "America is a family and the whole family should be free," Mr. President's ancestor says. Not great, but free. That is a vision for the United States that can make it great, again.

This motif of family is so strong in the video and in the current presidency, and carries a much deeper meaning than what is just on the surface.

The video starts out with family members betraying one another for power, with the male sibling getting angry at his sister for being the "face of the family." After that, the current Mr. President gets questioned about the motives of his ancestors. Do you know who has children who come from power, hold power, and are of both genders? President Trump, of course.

His oldest sons, Don Jr. and Eric are in charge of running the Trump family business while Trump remains president. His oldest daughter Ivanka, and her husband, Jared Kushner, are top advisors to Trump in the White House, according to Business Insider, each holding a certain bit of power. While no one in the Trump family has (literally) backstabbed each other for power (that people know of), this "family of power in politics" imagery in the video can very well be traced back to Trump himself.

Violations To The Constitution

New information has come to light about your history, Mr. President. The details of which has citizenry quite concerned. They reveal violations to both the Confessional Papers and the Constitution. The murder that took place in your family, Mr. President, the murder that laid foundation for your ascent, betrays the legacy of peace on which you ran and were voted into office.

JAY-Z has stated in the past that he isn't the biggest fan of Trump. During an interview with BBC 1 Radio in September, JAY-Z said, according to TIME:

I believe that we are resilient, especially us as black people and especially the culture. We have been through so much more than this guy. This guy, I'm looking at him like, man, this is a joke, with all — I can't even say with all due respect — with all disrespect.

While the references to this distaste are small, they are just a little clear.