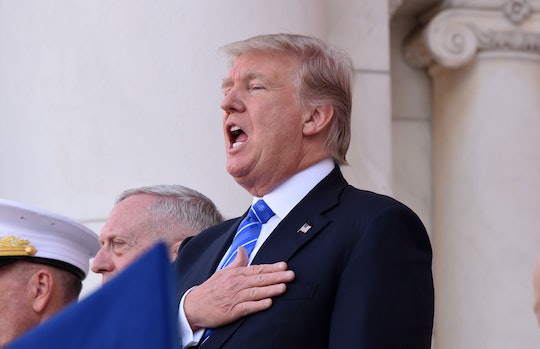 In another troubling sign about President Donald Trump's unusual view on matters of national security, the Associated Press broke a story on Tuesday night that Trump had reportedly asked world leaders to call him on his cell phone. Not only does the request break with diplomatic norms, it also raises security concerns. Even government-issued cell phones are not the most secure devices, meaning that foreign governments could potentially eavesdrop on the president's important phone calls, if the reports are true.

The White House did not respond to Romper's request for comment, and the officials who spoke with the AP all demanded anonymity, because they were not authorized to reveal this information. Reportedly, Trump primarily gave his phone number to newly-elected French President Emmanuel Macron, Canadian Prime Minister Justin Trudeau, and Mexican President Enrique Peña Nieto, urging them to give him a call. Reportedly, only "Justin from Canada" has taken Trump up on his cell phone offer so far.

The AP talked to national security experts who expressed concerns about the privacy of Trump's cell phone connection. Normally, diplomatic calls happen on secure phone lines in the White House or the presidential limousine. But according to what former National Security Council official Derek Chollet told the AP,

If you are speaking on an open line, then it’s an open line, meaning those who have the ability to monitor those conversations are doing so ... [A president] doesn’t carry with him a secure phone. If someone is trying to spy on you, then everything you’re saying, you have to presume that others are listening to it.

The reported breach of protocol and security is especially troubling to some, given that Trump repeatedly hammered his election opponent, Hillary Clinton, with allegations that she could not be trusted with classified information because she used a private email server.

And this is not the first time concerns have been raised about the way in which the president handles information. Not long after Trump took office, The New York Times reported that the president was still using his old, unsecured cell phone. Then, a couple weeks ago, Trump reportedly revealed highly classified information to the Russian ambassador and foreign minister when they visited the White House, a move that had the potential to damage the United States' relationship with the source that provided that intel.

And in more recent days, Jared Kushner, Trump's son-in-law and adviser, made headlines when word came out that he allegedly discussed setting up a secret back channel for communication with Russia during the presidential transition.

Uncannily perfect "Hotline Bling" gifs aside, the news that Trump has reportedly been asking world leaders to call him on his cell phone is a huge problem.