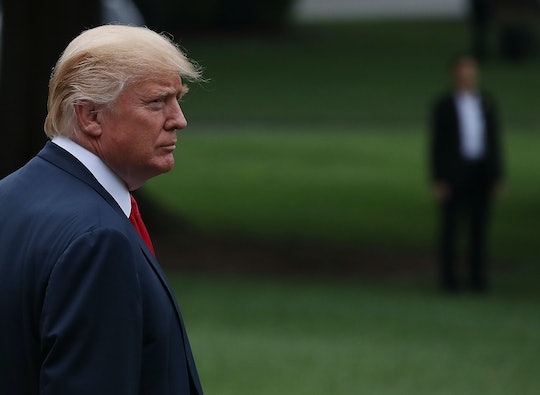 According to Newsweek and other sources, President Donald Trump retweeted a violent "Trump train" image of a train running over a figure with its head replaced by a CNN logo less than a day after he gave a press conference denouncing white supremacist violence in Charlottesville. His retweet came just three days after the death of Heather Heyer during a counter-protest against a white supremacist march in the Virginia town, and many found it in extremely poor taste. And either Trump realized how insensitive the tweet was, or someone else told him retweeting it was not a good move, because the retweet was gone from Trump's Twitter just minutes later.

The White House has not responded to Romper's request for comment regarding the "Trump train" retweet from the president's account.

In Trump's press conference on Monday about the tragedy in Charlottesville over the weekend, he specifically called out violence with statements such as, "Racism is evil, and those who cause violence in its name are criminals and thugs, including the KKK, Neo-Nazis, White Supremacists, and other hate groups that are repugnant to everything we hold dear as Americans,” and, "Those who spread violence in the name of bigotry strike at the very core of America," according to PEOPLE.

But retweeting an image of someone being run over by a train doesn't exactly fit the message that violence is bad. Trump deleted the tweet quickly, but it got plenty of attention anyway.

According to The Kansas City Star, people captured screen shots of Trump's retweet before it disappeared. So it doesn't matter that he eventually deleted it, because the internet is forever.

But that tweet is not even the end of the controversy. According to The Guardian, Trump shared another tweet from "an alt-right conspiracy theorist and provocateur," ("alt-right" is a term for white supremacists and neo-Nazis) which felt like a slap in the face to some people after his controversial "on many sides" initial statement about Charlottesville. That retweet, from Jack Posobiec, remained on his account as of Tuesday morning:

The retweet from another Trump supporter makes it harder to prove that the supportive "Trump train" retweet was a fluke. But according to the BBC, the White House said in a statement that the "Trump train" tweet was "inadvertently posted" and that it was immediately deleted once it was noticed. It's unclear who "noticed" the tweet and decided it needed to be deleted — Trump, one of his advisors, or someone else entirely.

According to Variety, the "Trump train" retweet was posted after Trump called CNN’s Jim Acosta “fake news" on Monday after the correspondent asked him why the White House didn't hold a press conference he had promised to do earlier in the day. The "Trump train" retweet may have been a reaction from Trump in regards to that incident; The Kansas City Star reported that the train retweet "called to mind the controversy after Trump retweeted a fake video of himself body-slamming a figure whose face was obscured by the CNN logo."

Whatever the reason for the "Trump train" tweet, it's definitely not OK for the president to denounce violence one day, then tweet violent images less than 24 hours later. It makes the message seem insincere, to say the least. Plus, it's a disturbing continuation of Trump's pattern of attacking the media.