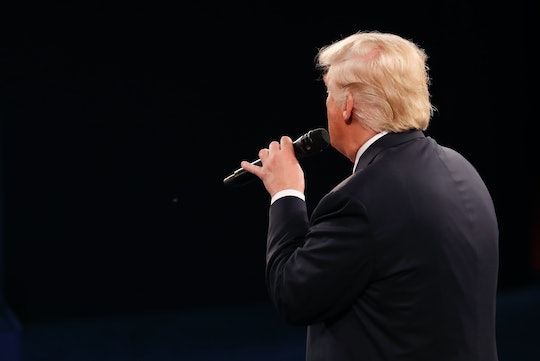 Trump Says He “Knows Nothing About Russia," But Reports Say Otherwise

During the second presidential debate on Sunday night, Republican nominee Donald Trump said he "knows nothing about Russia" when Anderson Cooper asked him about his ties to Russia. But that's not what he has said in the past, and that's certainly not what recent reports have shown. Trump has repeatedly praised Vladimir Putin in the past, and The Washington Post recently investigated his financial ties to the country.

The Post's findings showed that Trump invited Putin to his Miss Universe pageant when it was debuting in Moscow. Putin couldn't make it, but Trump reportedly received part of the $14 million investment Aras Agalarov, a Moscow billionaire who has connected Trump and Putin, paid to bring the pageant to Russia. Additionally, Agalarov reportedly said he and Trump agreed to build a Trump tower in Russia. The Post called Trump's views toward Russia "warm," even though "the overwhelming consensus among American political and national security leaders has held that Putin is a pariah who disregards human rights and has violated international norms... ."

So, what's funny about Trump's comment that he "knows nothing about Russia" is that it's actually pretty true — it was really one of the truest things he said during the debate. He doesn't seem to understand how Russia has suppressed its press for decades or how it is supporting Bashar al-Assad's regime in Syria. So he doesn't know anything about Russia. But he also does, in a way, because he does know that it can help him make money, at least according to these numbers turned up by the Post. Twitter found the whole thing amusing:

But some think that maybe Trump is being "nicer" to Russia during the debates because of his financial ties in the country. (Sure, he hasn't actually invested in Russia yet or put down money for a Trump tower, but he has received money from a Russian billionaire and wanted to host a private meeting with Putin during the Miss Universe pageant).

What was crystal clear about Trump's statement on Russia is that he doesn't seem to know anything about the politics of the country, but he won't speak poorly about it in any way. And why that is is pretty damn curious, especially since the general consensus from the U.S. is that Russia isn't a country we really like to ally with. So, is Trump missing a memo? Has he not read about the tie between al-Assad and Putin? Or is something more sinister going on like many have alleged with his financial ties there? Trump's Russia love doesn't make sense, and it's a bit frightening.