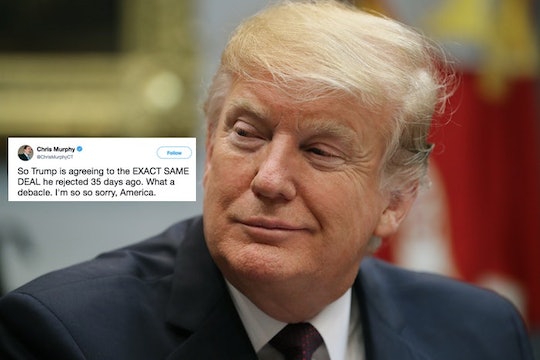 After 800,000 government employees went without pay for over a month due to the shutdown, there is finally a bit of relief on the way. After many Americans were beginning to believe there was no end in sight, a temporary solution was reached. On Friday, President Donald Trump temporarily reopened the government, but people are understandably skeptical of the decision.

Trump announced on Friday afternoon that he agreed to a three week short term spending bill that would allow the government to reopen, according to Vox, and allow government employees to return back to work, get paid, and also receive back pay for the work they did. This shutdown all leads back to funding — back in December, Trump shut down the government due to disagreements about funding for a physical border wall between the U.S. and Mexico, according to The Washington Post.

This three week spending bill reportedly does not include funding for a border wall, according to ThinkProgress. But, it will allow furloughed employees to return back to work and receive pay they missed during the shutdown, according to CNBC. But it's important to note that this solution is, technically, only temporary — Trump has already threatened to shut down the government again if funding for the border wall is not secured by Feb. 15, according to CNBC.

Needless to say, people have mixed and heated emotions about it.

Even Trump remained skeptical about the government staying open. During remarks from the White House rose garden on Friday, Trump said, according to CNBC:

We really have no choice but to build a powerful wall or steel barrier. If we don't get a fair deal from Congress, the government will either shut down on Feb. 15 again, or I will use the powers afforded afforded to me under the laws and the Constitution of the United States to address this emergency.

So while people are happy they can return back to work and some can get their back pay "very quickly or as soon as possible," according to CNBC, they still might be looking towards upcoming hardship, unless this funding is secured the way Trump wants to see it.

This is the kind of deal that both parties have tried to negotiate for weeks, according to CNN. Although Trump was initially resisting the government re-opening without funding for the border wall, he was clearly singing a different tune on Friday. But there is no telling what the House and Senate will decide on in the upcoming three weeks about this border wall — and if their budget solutions will please the president.

People on Twitter can't help but to feel frustrated with this current situation, especially since government employees will be returning back to work next week, not knowing if they have to be afraid of the government shutting down yet again.

Speaker of the House Nancy Pelosi stated on Friday that she was happy that Trump was able to come to a solution to end the shutdown, but was unhappy that the government had to be shut down at all. "I'm sad it has taken this long," Pelosi said. "I'm glad we've come to a conclusion today as to how we go forward in the next three weeks."

Government employees will be able to breathe a little easier this weekend, knowing they can finally go back to work and not have to worry about another week without payment. But, based on the remarks from Trump and Pelosi, it is clear that this temporary solution to reopening the government is just that — temporary.