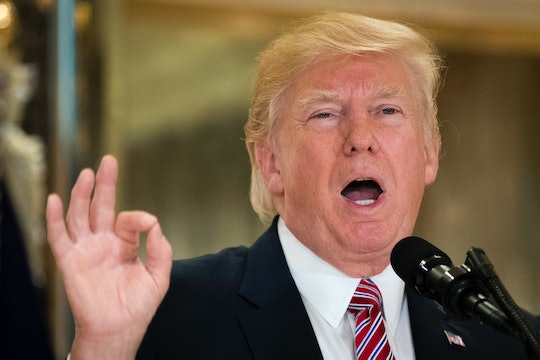 Twitter Is Outraged Over Trump's "Charging At" Comments About Charlottesville Violence

President Donald Trump's most recent statements on this weekend's violent events in Charlottesville are upsetting on multiple levels, but Trump's "charging at" comments about Charlottesville are particularly problematic. The debate over one word in particular has Twitter enraged, questioning if Trump really just blatantly grouped himself with rallying white supremacists.

Politico transcribed the response, shared to reporters at a press conference in Manhattan's Trump tower:

That "indiscernible" word has been perceived two ways: as "'em" (as in "them") and "us," and Twitter is honing in on the specifics. For the president to insist that the "alt-left" should feel guilty for protesting against white nationalists wielding torches defending a Confederate monument is absurd, and to then identify with said white nationalists is especially repugnant. Regardless of the "them" or the "us," to shame counter-protesters for "charging at the ... 'alt-right'" places blame on reactors, and not the initial instigators themselves.

You can listen to Trump's words below and attempt to discern his exact word choice. The sound switches between the room's ambient echo and the sound captured by the microphone, muddling the recording:

Seeing as the audio is unclear, its unproductive to base an entire argument on a contested word. The rest of the phrase is still massively important, as it insists that counter-protesters were equally complicit in the tragedy that ensued.

Twitter users were also quick to highlight the fact that shaming the parties standing up against violent ideologies — ideologies that emboldened a man described as a "Nazi sympathizer" to kill protester Heather Heyer, according to CNN — is totally unfounded. Many note that the same rhetoric has been used in the past so as to shame Nazi-fighting forces in the past:

Others adopted a more satirical approach, taking Trump's own words and emphasizing their absurdity:

While Twitter continues to debate "us" versus "'em," the fact of the matter is that the president blamed people protesting white nationalism for the violence in Charlottesville. Rather than denounce the Ku Klux Klan and neo-Nazi members that incited a rally defending a Confederate statue, he shifted blame onto those who had the strength to oppose such oppression. So let's face it: We don't need Trump saying "us" to know what side he appears to stand for and defending white nationalists is a message that rings loud and clear.