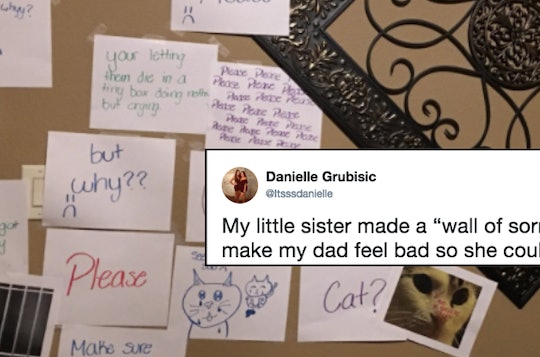 The internet is full of stories of people doing awesome things, kids being adorable, and a bunch of cute animals. But sometimes, there are those magical stories of a kid doing something both awesome and adorable. Such is the case with this viral story: Twitter can't get enough of this girl who expertly guilted her dad into getting her a cat. It's the perfect internet story; this kid made some incredibly valid points and the creative plan she devised has left the internet in awe.

Twitter user Danielle Grubisic upload a series of photos to her account over the weekend, and her post has since gone viral, with over 54,000 retweets and more than 143,000 likes. And once you see the post, you'll understand why. According to Grubisic's post, her 13-year-old little sister created a "wall of sorrow" to guilt their dad into getting her a cat.

"My little sister made a 'wall of sorrow' to make my dad feel bad so she could get a cat," Grubisic wrote alongside several photos of said wall. On the wall were several handwritten notes to the girls' dad, pleading with him to get a cat, as well as some drawings, as well as a few photos of real-life cats in shelters. Yeah, this girl knows how to work.

While this little girl's tactics may be unconventional, they did the trick. Grubisic's tweet ended with, "well it worked," along with a photo of their dad with a cat on his lap. This viral series of photo goes to show that, sometimes, all you need is a little manipulation to get what you want. Well, for kids that is.

And considering how much the internet loves cats, smart young girls, and men paying up, it makes sense that Twitter would go nuts over this story.

People Were Totally All About This Girl Getting What She Wanted

Some Were Even Inspired & Plotted Their Own Walls Of "Sorrow"

Of Course, Some People Got Annoyed At The Grammar

The story of how the Grubisic family got their new cat is one for the books, with plenty of humor and sweetness to boot. Considering the girl's use of shelter cat images and pleas like, "your [sic] letting them die in a tiny box," and "your [sic] killing innocent lives," it's probably safe to assume that the dad opted to rescue a shelter cat for his daughter. And, of course, there's her use of cat tears with an arrow pointing to it with a caption of, "this is because of you." It's easy to see how the dad gave in to her request.

And it wasn't just begging that got Grubisic's sister the pet of her dreams. Oh no. If you can't tell, there's a small, typed note on the bottom right of the "wall of shame," and Grubisic shared a close-up of what it said.

"I would be so thankful and tell you you're the 'BOMB' every day," the note reads in part, according to Grubisic's tweet. Her sister also listed all the ways she would help with the cat, if she were to get one, including changing the litter, feeding it, and even offering to pay for some of the food and other supplies. Clearly, this girl is ready for the responsibility that comes with being a pet owner.

It's no wonder that dad caved in, and it's also pretty great. According to the American Society for the Prevention of Cruelty to Animals, there are approximately 3.2 million cats that go into pet shelters each year. Of those millions, 860,000 cats are euthanized due to poor resources and not having enough people who want to adopt them. So, not only is Grubisic's little sister seriously brilliant for coming up with the "wall of sorrow," but she's also a real-life hero.