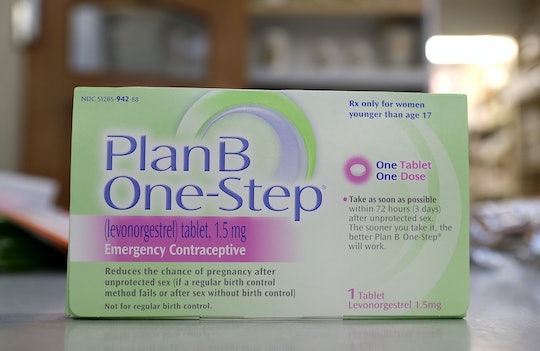 In order for emergency contraceptives to be effective in preventing pregnancy, they must be accessible. On college campuses, however, that's not always the case, whether it's because pharmacies run out of the morning-after pill, health centers close during business hours, or students are simply uncomfortable retrieving it face-to-face. To help remedy this, one University of California, Davis senior worked to make sure that a vending machine selling contraceptives was available on campus. Now, students there can purchase the morning-after pill, as well as other necessities, right in the same building that's home to the campus gym and boasts long hours.

According to The Sacramento Bee, that fact the emergency contraceptive is sometimes out of stock at Davis's sole 24-hour pharmacy prompted Parteek Singh to lobby for the vending machine. This way, buying the pill — which should be taken no longer than five days after sex — is much more compatible with many students' schedules and preferences. The student health center where student can also go for emergency contraception, for example, is open only during business centers. By contrast, the machine, dubbed "Wellness to Go," is located in the campus Wellness and Recreation Center, which is open 18 hours a day.

Although the vending machine model hasn't widely taken hold at colleges and universities across the nation, UC Davis isn't the first to implement it. Local TW station KCRA reported that the 21-year-old Singh, an economics major, borrowed the idea from Claremont University Consortium and Pomona College in Southern California. And, in March, college some students across Maryland supported a bill that would mandate that their schools provide emergency contraceptive 24/7. In an op-ed for the University of Maryland's student newspaper, The Diamondback, student and activist Sarah Riback laid out her argument:

Unlike a business, a student's sex life does not operate on a 9-5 schedule, and because of this, access to emergency contraceptives should not operate on a schedule. It is in the best interest of this university and its students to rectify the issue of emergency contraceptives on the campus, as the lack of such products doesn't always lead to less sex, but perhaps more unsafe and unwanted pregnancies.

At UC Davis, medical staff are in favor of the vending machine. Elsewhere, though, some worry that allowing students to bypass the step of meeting with a medical professional to get the morning after pill, which is often necessary, could cause them to miss out on important learning opportunities. "College students are still learning to navigate the health care system and can benefit from guidance by a trained health-care professional," Roanna Kessler, the director of the student health and wellness center at Johns Hopkins University, recently told The Washington Post.

Either way, it's hard to argue arming students with the tools to take control over their own reproductive health is anything but progress.