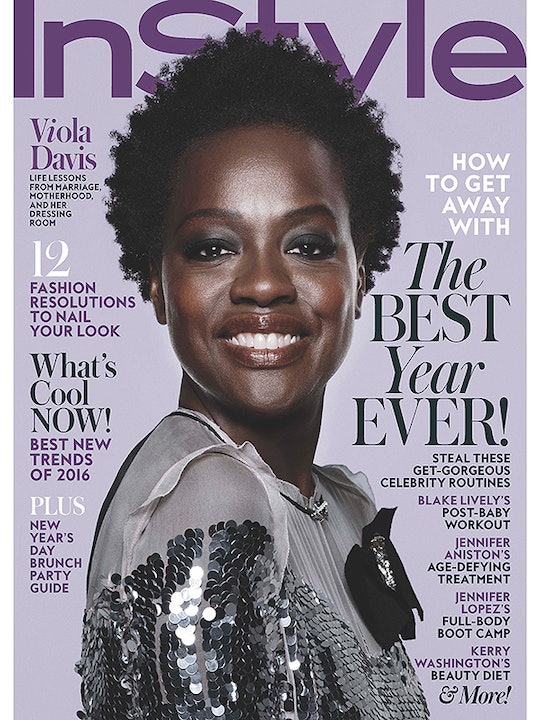 Viola Davis' January 'InStyle' Cover Reminds Us How Badass She Is

It's been almost two weeks since How to Get Away with Murder took its mid-season break, and if you've been in Viola withdrawals like the rest of us, you're in look. Viola Davis is InStyle magazine's January 2016 cover girl, and her genuine, happy conversation in the behind-the-scenes video combined with her beautiful looks her made us fall in love with her a little more. Davis, who has been racking up Emmy and Tony awards for her acting, is best known for her role on HTGAWM, where she stars as the cunning attorney Annalise Keating. But as it turns out, she's also an outspoken, fabulous, strong, feminist mother. (For the record: Not surprising!)

In the behind-the-scenes video of her InStyle cover shoot, she talked all about the v-neck dress she wore, which morphed into a commentary about her life. Said Viola:

I loved all the clothing that was chosen for this shoot. My favorite one was the Lanvin dress, because I felt like a movie star in that dress. And I know that people always say that I'm a star and a celebrity, but I never feel like one. Taking care of a 5 year old, cooking at home, and running to the set when you've had four hours of sleep, you don't feel like a movie star.

The aforementioned 5 year old is Davis' daughter, Genesis Tennon, who Davis adopted in 2011. She explained to PEOPLE:

I always tell Genesis she was born from my heart, not my belly.

Which, after hearing lots of debate about how best to talk to kids about their adoption, might sit at the top of my list.

There are so many ways to mother rather than to carry a child in your body. So many children need parents, and so many of us want to mother. Know that you will experience motherhood to the full extent.

Davis totally seems to be enjoying motherhood. She posted this adorable picture of her daughter on Halloween, when Genesis wanted to forgo any Frozen or princess costumes and decided to dress up as her own mother instead.

She's also a huge advocate for embracing yourself exactly as you are. She told InStyle she's not afraid of aging, and rightly so:

I've never determined my value based on my looks or anything physical. I've been through a lot in life, and what has gotten me through is strength of character and faith."

It's one of the best lessons she could give Genesis.

Davis also advocates for equality, with her emotional, drop-the-mic acceptance speech at the Emmys in 2015. She thanked the writers of How to Get Away with Murder, as well as other black stars, saying they were "people that have redefined what it means to beautiful, sexy, a leading woman ... to be black."

To read more about this leading lady, pick up her InStyle cover story, which hits shelves December 11. In the meantime, we'll continue to bow down to her badassery, as one should.