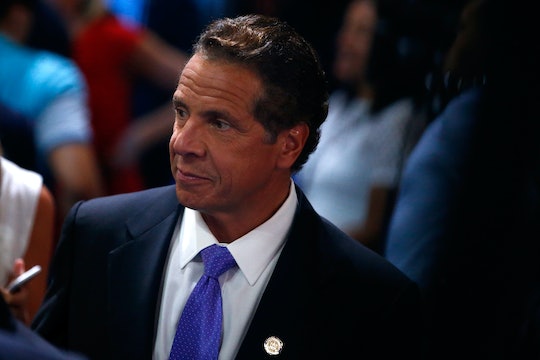 Was The Chelsea Explosion Terrorism? Gov. Cuomo Says There Are No International Links

Just one week has passed since Americans commemorated the 15th anniversary of 9/11, so when an explosion ripped through a Manhattan neighborhood Saturday evening, my first thought was immediate and visceral: terrorism. And after officials discovered an apparent second, undetonated explosive device just blocks from the scene and tallied the 29 wounded, New York Gov. Andrew Cuomo confirmed that the Chelsea explosion was "obviously" terrorism. But, right now, there are no international links, and no group has claimed responsibility.

"A bomb exploding in New York is obviously an act of terrorism," the governor said at a press conference near the site, according to BBC News. "... We will not allow these type of people and these type of threats to disrupt our life in New York. This is freedom. This is democracy, and we are not going to allow them to take that from us."

Who the "them" he's referring to actually is, though, has not yet been determined. Considering the chaos the incident inspired and the extensive physical damage it caused in addition to the casualties, it's clear that the perpetrator or perpetrators are both savage and callous — attributes easily easily attributed to the terror group ISIS and those who pledge allegiance to it as well — but jumping straight to that conclusion wasn't something officials were quite ready to do, without all the facts in place, and no outside group claiming responsibility.

Among the most disturbing of the details to emerge from the situation since it started with an explosion around 8:30 p.m. ET is that authorities soon discovered another device in a dumpster just blocks away. It was a "pressure cooker with dark colored wiring protruding, connected by silver duct tape to what appears to be a cellphone," CNN reported — a device that bears a terrifying resemblance to the one the Boston Marathon bombers used to kill three people and injure nearly 300 more in 2013.

Those killers were undoubtedly terrorists, radicalized extremists out to maim and kill as many Americans as possible. But they weren't actually members of any established terrorist organization. That's a fact that, honestly, makes them seem even a little scarier, and the same could be true of whoever carried out the attacks in Chelsea.

Because as the deadliest mass shooting in American history at a gay nightclub in Orlando in June and the devastating Bastille Day truck attack in Nice, France, in July demonstrate, murderers don't have to be a part of ISIS to join them in their quest. The Orlando killer had pledged allegiance to the group; In France, ISIS described the truck driver who plowed through the crowd as "soldier of Islam" even though there was no known former connection between them.

Authorities are surely exploring every possible lead, theory, and suspect as they investigate the cause of this incident. Investigators believe that the explosion originated in or near a trash bin, Newsday reported, and one promising development is that they have surveillance video footage of a person who may have been involved. And just as they did in the says after the Boston Marathon bombing, authorities will relentlessly pursue any and all people who had a role in this attack on the New York City and the United States. Whether they're international terrorists, domestic ones, or ISIS copycats, they will not force Americans to cower in fear or change our way of life.