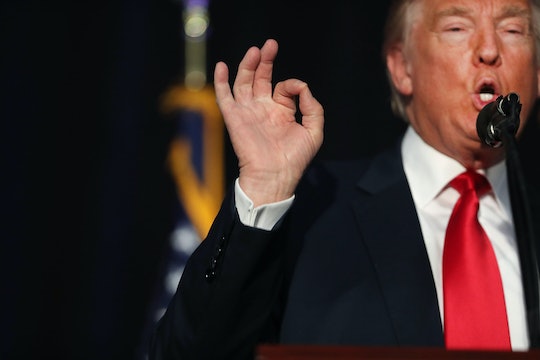 Was Trump Doing Business In Cuba Illegal? The Allegations Are Very Serious

A startling new Newsweek article alleges that, according to "former Trump executives, internal company records and court filings," a company controlled by the Republican presidential nominee spent at least $68,000 on a business trip to Cuba in 1998. Due to an embargo first extended in 1960 that wasn't eased until the Obama administration, Trump's business in Cuba would have been illegal without explicit approval from the U.S. government. The article claims that members of the consulting firm Seven Arrows Investment and Development Corp., traveled to Cuba on behalf of Trump Hotels & Casino Resorts, and covered their spending by disguising it as a charitable donation. Romper's request for comment to Trump's representatives was not immediately granted.

American travel to Cuba at that time was severely restricted, and without a license from the federal Office of Foreign Assets Control, spending any money in Cuba (including travel expenses) would have been in violation of federal law, the magazine explained. OFAC officials told Newsweek that no such license was granted to the persons or companies that were allegedly involved in the trip. According to a former Trump executive, the purpose of the trip was to pave the way for a possible future casino on the island, should the embargo ever be lifted. The same source also claimed that Trump had direct knowledge of the trip.

When questioned about the allegations on The View on Thursday, Trump campaign manager Kellyanne Conway used a tactic similar to her employer; she repeatedly evaded the question and attempted to change the subject to alleged wrongdoings by former Secretary of State Hillary Clinton. Co-hosts Whoopi Goldberg and Paula Faris redirected the conversation, and although Conway stressed multiple times that Trump hadn't invested in Cuba (which wasn't the question she was asked), she did concede that "they paid money in 1998" to travel there. That would have been illegal. However, Trump won't see prosecution, because the statute of limitations has run out.

Just months after the alleged Cuba trip occurred, Trump launched a bid for president, running under the Reform party. During an appearance at the Cuban American National Foundation in Miami, Trump spoke in favor of the embargo and vowed to never spend money there while Fidel Castro was in power. "We must not reward Fidel Castro with trade, hard currency, or respect," he told the crowd. "If I could meet Castro right now, I have, personally, two words for him: Adiós, amigo." It seems Trump's misguided pandering toward "Hispanics" goes back much earlier than the infamous taco bowl tweet.