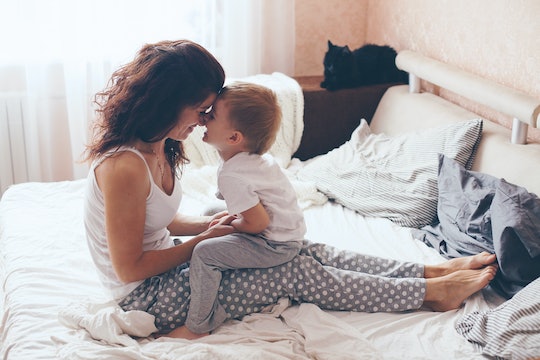 I’m a mom of a young boy. He’s 2-and-a-quarter, he can walk, run, jump, skip, draw circles, identify our cars by make, correct me when I’ve called his shorts “pants” or his pants “shorts.” He can intentionally cry and tell me about it. He’s (mostly) potty trained. And yes, I still breastfeed him. He still regularly asks me for milk and I still regularly give it to him.

This typically happens three times a day: when he wakes up, when we are reunited after a long day of work and daycare, and just before his bedtime. In our country, I am a rare mother, and he is a rare child – just 36 percent of children are still breastfeeding at one year of age, per CDC data. I am regularly questioned by my family about when I am going to stop. They don’t want me to be one of “those mothers,” still breastfeeding when the child is well past the toddler years; they worry I’ll create some kind of aberrant child through meeting his request for milk.

What I felt when I heard that entitlement radiating though his speech was disgust, but it was mixed with something harder to name. Something closer to fear.

Like many watching the Kavanaugh hearings, I was filled with a mix of sympathy and pride on hearing Christine Blasey Ford’s testimony. She was so brave and persevering, choosing to be publicly exposed and vulnerable with her old and painful memories. But when Brett Kavanaugh testified, I was filled with something else entirely. His narrative of this trial and the harm it has done to him exposed a deep entitlement – he feels entitled to have a chance at the Supreme Court, and if he is not appointed he will feel robbed of the forgone conclusion of his future.

“This has destroyed my family and my good name,” he charged at the room. “A good name built up through decades of very hard work and public service at the highest levels of the American government.” Kavanaugh repeatedly claimed he had “worked my tail off” to get where he is.

He feels entitled to coach Little League, entitled to his easy, happy life. And if true, the acts he is accused of bring his entitlement into focus even more sharply. If he did commit those alleged acts — pinning another human to a bed while he laughed with his friend, as Dr. Ford testified – then he felt entitled to that too: to the cheap thrill of exercising his power by denigrating someone else, of physically overpowering someone just because he could.

What I felt when I heard that entitlement radiating though his speech was disgust, but it was mixed with something harder to name. Something closer to fear – the fear that somehow I am involved in all this, involved in perpetuating these systems bestowing power and entitlement on the male, the white, the monied. Because I know that the first person who tells a child that they are worth something, maybe worth more than the other people they know, is someone like me. It’s a mother, who loves her child beyond measure, beyond reason – and because that love is limitless, she forgets to teach the child that there are limits: boundaries on his behavior that he needs to learn and respect.

Every day, my son asks me for milk. Every day, I have the opportunity to help him learn about boundaries and limits.

Entitlement is a belief that emerges when praise and deserving are drilled into a young mind. It takes root firmly when paired with unchecked ability to control others. I want my son to learn that he may have strong talents and good luck that give him advantages in life – but that learning to respect the boundaries of others is what makes him a good person. I have years to help shape this message, but after listening to the Kavanaugh hearings, I realized that I have a great opportunity to start teaching this now, in the breastfeeding relationship that we share. Breastfeeding is not a sexual act, but it is both physical and intimate. As such, it makes a great training ground for learning about consent.

Every day, my son asks me for milk. Every day, I have the opportunity to help him learn about boundaries and limits in his access to something he dearly loves and craves.

Milk, or “muk,” as he calls it,is one of his all-time favorite things. He asks for it regularly, and in all kinds of ways – grunting “uh-uh-uh” while he motions to my breasts, or patting them while he states “I need some muk!” With coaching, he can even say “Please mommy can I have some muk?” No matter how politely he asks, what I have realized is that he needs to know that the milk is mine. It comes from my body and my body is mine. He does not have a right to it, no matter how much he loves it.

I choose to share it with him, when and where I want. Saying no – when it makes me uncomfortable, when I have something else I want to do, for any reason at all – is important. It’s important for him to want and be left wanting, to know that he can deal with the disappointment of it. That it does not mean that I don’t love him. Limits are put in place so that we can love each other better.