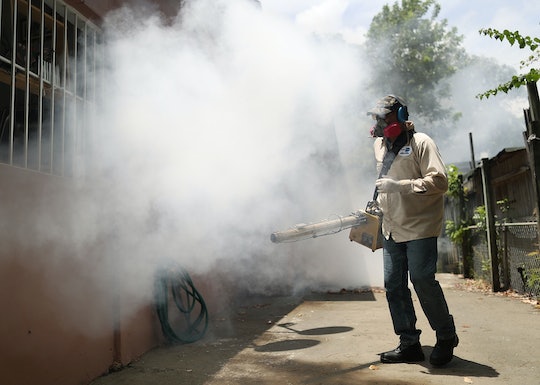 Zika-Fighting Mosquitoes Are Now On The Loose

In Miami Beach, Florida, an interesting experiment is taking place out in the open airs of Key West: on Tuesday, the Florida Keys Mosquito Control District released 20,000 male mosquitoes into the area. For those who simply associate mosquitoes with annoyance and the nasty smell of repellent, adding more mosquitoes to the environment might seem like a losing deal for Floridians — but these are no ordinary bugs. These are Zika-fighting mosquitoes being released into the wild, and they're meant to lower population levels of Aedes aegypti, the nefarious little mosquitoes that carry Zika, dengue, and chikungunya.

More Like This
The FDA Has Authorized The Pfizer Vaccine For Kids As Young As 12
Survey: Just 30% Of Parents Would Get Their Kids Vaccinated Against COVID-19 Right Away
Vaccine Shedding Is Not A Thing, Experts Say
Vaccinated People Can Ditch Masks. Where Does That Leave Kids?

Before being released by the Florida Keys Mosquito Control District in Key West, this particular group of all-male Aedes aegypti mosquitoes were all infected by a company in Kentucky with a naturally-occurring bacteria called Wolbachia. When any of these Wolbachia-infected males mates with a female Aedes aegypti, their offspring won't survive to adulthood — their eggs won't even hatch — meaning population numbers should drop in the area. (And don't worry: Males can't bite and Wolbachia doesn't harm humans, so there's no need to fear these guys' release into the wild.)

According to NBC, the trial is set to last for about three months, with new mosquitoes released twice a week. The goal is to have a total of seven Wolbachia-infected males for every regular male Aedes aegypti in order to effectively cut back populations.

"This really has the potential to be a game changer in terms of vector control — the biggest thing since DDT," Philip McCall, a medical entomologist at the Liverpool School of Tropical Medicine told Nature in October.

Researchers have been experimenting with Wolbachia and Aedes aegypti (as well as its closely related but less threatening cousin, Aedes albopictus) for some time now. According to Nature, Wolbachia has been used to hinder mosquitoes' fertility, influence their offsprings' sex, and block the reproduction of viruses. Wolbachia doesn't infect Aedes aegypti naturally, but with a little prodding in labs, it could entirely change how we approach mosquito control.

Wolbachia-infected mosquitoes have already been released in Rio de Janeiro, Brazil; Guangzhou, China; and Medellín, Colombia. Researchers are excited about its future use, but the limited trials are being used to test its efficacy, cost point, and ability to show lasting change in virus rates. Past pilot studies have proved it fairly effective: After the introduction of Wolbachia mosquitoes in Nha Trang, Vietnam, the island saw a dramatic decrease in its annual number of dengue cases, according to The Atlantic.

These infected mosquitoes might be one of the most promising advances to hit diseases like Zika, dengue, and chikungunya, which infect millions around the world each year. Dengue alone is one of the leading causes of severe illness and death in young children in some areas of the world, according to the World Health Organization, and both chikungunya and Zika have spread far in a seriously small amount of time.

With Wolbachia, researchers could avoid pursuing costly genetic modification of mosquitoes, and governments could keep from spraying pesticides over cities. With any luck, these little Zika-fighting mosquitoes could help end some of their regular counterparts' scary virus-spreading power.