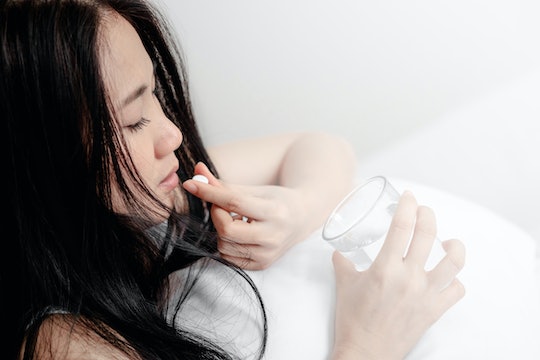 The Most Common Side Effects Of Letrozole Aren't So Bad, Usually

One of the drugs used to treat infertility is letrozole. It’s a relatively new treatment that helps women who have trouble conceiving, and can be especially helpful for women with PCOS (polycystic ovary syndrome). Still, it’s important to consider what the side effects of letrozole are before making any big decisions.

As the National Institutes of Health reports, a study found that letrozole has proven more effective than previous drugs used to help women with PCOS become pregnant. The study also found the women treated with letrozole “not only were more likely to ovulate than were women treated with the standard drug, clomiphene, but were also more likely to have a live birth,” reported the NIH. Letrozole is taken orally, making it less invasive than other types of treatment.

Originally used to treat breast cancer in post-menopausal women, letrozole works to help lower estrogen production. This triggers the release of FSH (follicle stimulating hormone) from the pituitary gland, which causes the ovaries to ovulate, as explained in a paper published in ISRN Obstetrics and Gynecology.

I reached out to the Fertility Specialists of Texas via email about the typical side effects of letrozole, and partner physician Rebecca A. Chilvers, M.D responded to my questions.

“Most women don’t notice side effects when they are on letrozole for just a few days, as is the customary period of use in fertility treatments," Dr. Chilvers explains.

"However, letrozole lowers estrogen production by the ovaries in that time frame (which is how it is effective at causing the brain to tell the ovaries to make mature eggs that will ovulate), and the most common side effect is hot flashes,” Dr. Chilvers says. There’s a more comprehensive list of side effects on the RxList website, however, these other side effects are likely to only be encountered when the drug is used over longer periods of time to treat breast cancer.

I asked if there are any side effects to be concerned about. Should certain symptoms be reported to your doctor? "I tell my patients if they have any headaches or vision changes that I will switch medication, but those side effects are more common with clomiphene citrate, commonly known as Clomid. Letrozole has a better side effect profile in my opinion," says Dr. Chilvers. “The drug letrozole appears to be more effective than the standard drug clomiphene.”

Finally, I asked if there’s any other information about letrozole that’s important to know. “Letrozole has been shown to have a slightly higher pregnancy rate than Clomid in patients with PCOS (polycystic ovarian syndrome)," Dr. Chilvers explains. "It also results in a slightly lower number of multiple births like twins and triplets compared to Clomid. It is my preferred first-line therapy for young patients trying to conceive who have unexplained infertility or who simply have irregular menstrual cycles/ovulation issues,” she adds.

Ask your doctor if you think letrozole could be right for you, especially if you deal with PCOS. If the side effects are too much for you, your physician will work with you to find another option.