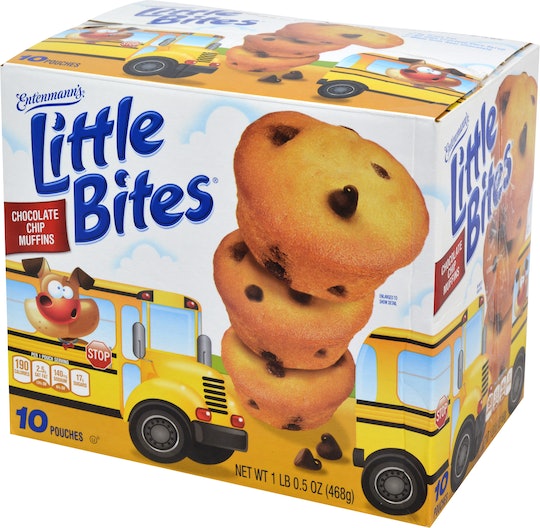 Small pieces of plastic have been found by customers in packages of Entenmann's Little Bites muffins, sparking a voluntary recall by the company. The bakery goodies affected include Entenmann's Little Bites Fudge Brownies in 5-pack boxes, 5- and 10-pack boxes of chocolate chip muffins, and Variety Packs with 20 muffins. How do you know if your muffins are potentially contaminated with plastic? Check the package for the "Best-By" dates and UPC codes. What best-by dates are part of the Entenmann's recall? The affected muffins have dates ranging from Sept. 24 to Oct. 8.

Technically, the recall is from Bimbo Bakeries, which said, according to CNN Money, was caused by a "manufacturing failure at a contract manufacturer's bakery in Illinois.

According the to FDA, the recalled muffins were distributed to stores in 30 states over the past two weeks. If you've recently bought these for a quick back-to-school breakfast, here's how to check your packages.

Here are the affected packages of Entenmann's muffins, according to the FDA.

A Bimbo Bakeries spokesperson tells Romper there are nearly half a million boxes, 499,000, included in the recall. There has only been one injury reported: a small cut in someone's mouth.

So if you're worried you sent your kid to school with one of the contaminated muffins in their lunchbox, they're not likely to be gravely injured. Maybe just scratched, so no need to take any PTO for this one to run to school.

"If anyone is concerned that they or their child may have ingested the product, they can call consumer relations at 1-800-984-0989 24 hours a day," Bimbo said by email.

If you have one of the recalled boxes of muffins, you can return it to the store for a full refund, Bimbo Bakeries said in its statement. Or call 1-800-984-0989.