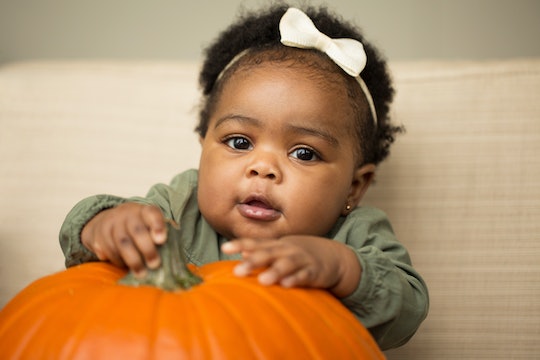 This November 28, you shall gather with family to feast. The older kids shall stare longingly at the pie and attempt to eschew their greens. You shall stare longingly at the unopened chardonnay and attempt to eschew your Uncle Rick's thoughts on the impeachment proceedings. But what about the bebes? What foods can babies eat on Thanksgiving? I mean, other than that which is produced via mammary or by stirring Enfamil powder?

The Mayo clinic says it's okay to give solids to babies around six months old, and as young as four months. So if your four month-old can hold its little noggin upright and sit without support, they might be ready for a little nibble of something.

I reached out to Nicole Silber, R.D., a pediatric nutritionist, for some turkey day ideas for all of the onesie-clad guests with no teeth. Silber works with the site FoodieKid, which makes organic, ready-to-cook baby meals, and unsurprisingly, she had many suggestions.

"Roasted, moist turkey is a healthy and delicious protein for new eaters!" Silber says. "For a smooth consistency, blend it with a moist veggie like a butternut squash. Choose dark meat turkey, which is both more moist for safe swallowing, and has a higher fat content, which is needed for growing babies." (If the child is full-on eating fingers foods, Silber says to be sure to cut food into small, fingernail size pieces.)

Other suggestions? "Soft, moist cooked yams, carrots, beets, and butternut squash, are a nutritious side. Either puree for first-time eaters, or serve as soft finger foods. Just be careful about the added sweeteners. Avoid any maple syrup, sugar and especially honey because of the risk of botulism under the age of one."

As for any Thanksgiving staples that are not good for babies? Silber says cranberry sauce is "too high in sugar for those little bodies." And to avoid anything that's too dry, which could be a choking hazard.

While it's of course super fun to try out new foods on a baby, and to see what makes them sigh with pleasure like little Rachel Rays (yams) and what makes them screw up their little faces like you have just fed them noxious sludge from the floor of the garage (Brussel sprouts), Silber reminds parents that it's important to be mindful that your child may be allergic to certain foods. So be sure to watch out for nuts in side dishes, and be aware of offering things that contain fish, wheat, eggs or soy.

But allergens and choking hazards aside, Silber says not to be afraid to give babies flavorful food. "There is no need to serve bland baby food, any day of the year. So, it's OK to offer them foods that have oil, herbs and spices added. What you want to avoid is salt in babies under 6 months."

So yeah, you can't just toss your baby a bag of pork rinds on Thanksgiving. But there are still plenty of tasty bites they can try. Foodiekid actually has a Thanksgiving recipe for a butternut squash, spinach, and thyme puree that looks quite delicious. And if your kid doesn't eat it, well maybe you can stuff it down yourself once the relatives are gone and the noise level has dropped by 40 decibels. You can wash it down with that chardonnay, which you likely will have already uncorked with your teeth.