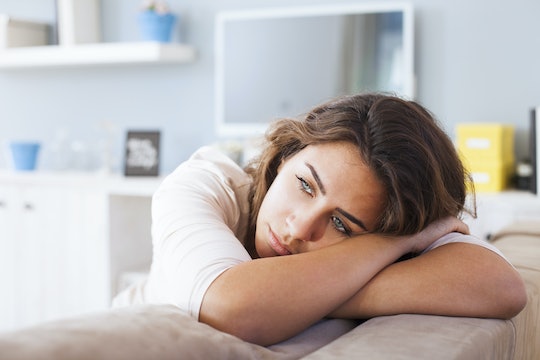 Everything You Need To Know About Chemical Pregnancies, According To Science

When a pregnancy ends unexpectedly, it's devastating. It's been described as watching hope just flow from your body as though it's the normal course of events — nothing more than a biological mechanism. But to the mother, it can incite a full range of emotions. Sometimes, this loss happens very early in pregnancy. You might've only just found out you're pregnant, and your period might only be a few days late. This early pregnancy loss is called a chemical pregnancy. But, what causes a chemical pregnancy? How is it different from other miscarriages?

A chemical pregnancy is a specific type of early pregnancy loss that happens before an ultrasound could be used to detect a yolk sac, but after hCG, the pregnancy hormone, is detectable in the blood and urine, according to The Motherhood Initiative. Chemical pregnancies occur somewhere between implantation and seven weeks of gestation, meaning many women may not realize they were ever pregnant to begin with because of how early it happens. 50 to 75 percent of all miscarriages are technically considered chemical pregnancies. There are myriad possible causes for chemical pregnancy, from hormonal abnormalities, blood clotting problems, anatomic abnormalities in the fetus and developing placenta, and even advanced paternal age, noted Seminars in Reproductive Medicine.

When a pregnancy ends early, the reason is often unknown and that's frustrating for both mothers and medical providers. However, since 15 to 20 percent of all pregnancies end in spontaneous abortion, it's not considered uncommon or grounds for further inquiry, according to the University of California. Two or more miscarriages in a row is very unlikely, and recurrent miscarriages are considered rare by their standards. Experiencing a chemical pregnancy does not necessarily mean you're more likely to experience a second or third. If you do, your doctor will begin evaluating the reasons why this keeps happening to determine if anything can be done to prevent it.

Contrary to popular belief, stress does not cause regular miscarriage, noted an article in the Proceedings of the National Academy of Sciences. It's a common misconception and it needs to be dispensed with. However, there is some correlation to the levels of the stress hormone cortisol in the blood with early miscarriage or chemical pregnancy, but so far, the research only shows correlation and not causation.

The most common reasons for early pregnancy loss are more complex than just simple stress. These reasons are so varied and many that it can be nearly impossible to diagnose with any level of certainty. The origins of the loss could be from something as seemingly benign as an infection early in the pregnancy that triggers an immune response in the body that ends with the termination of the pregnancy as well because it, too, is seen as a foreign invader, according to the New England Journal of Medicine. Alternatively, women with even a subclinical thyroid production issue are at a greater risk for chemical pregnancy, noted Thyroid. That means that your thyroid function is good enough to be considered just outside normal limits, but it's at either side of the scale far enough that it effects the pregnancy.

There are also environmental factors which could be at play such as smoking or alcohol use, noted Seminars in Reproductive Medicine. The same article lists blood clotting disorders, advanced paternal age, and various chromosomal abnormalities as potential risk factors and reasons for a chemical pregnancy.

Chemical pregnancies are all treated differently depending upon when in the pregnancy they occurred, and after an evaluation of risk factors. Whether or not the pregnancy was ectopic matters, too, as it often leads to an increase in production of hCG, according to Healthline. Your OB-GYN will determine the best course of action for your specific loss, and that might include a procedure to remove leftover tissue from the pregnancy.

Miscarriage is a loss just like any other. You're absolutely allowed to mourn the death of that pregnancy. Grieving, however burdensome, is necessary. You're also allowed to move on, when and if you're ready. You just need to be ready.