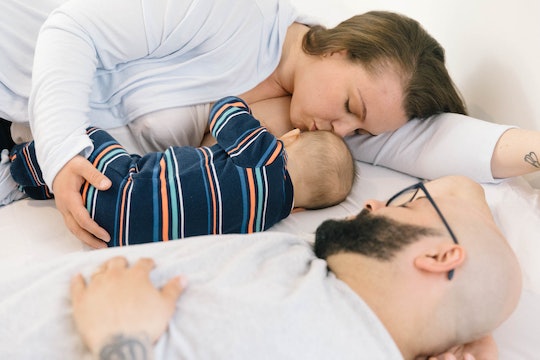 What Co-Sleeping With Your First Kid Is Like Vs. Your Second

I never thought I would co-sleep with one child, let alone two. I had a lot of preconceived notions about the kind of people who shared a sleep space with their child, and incorrect assumptions of how it affects little ones, that had me dead set against the practice. But rarely does a battle plan survive contact with the enemy, as they say, and actually having children showed me that, no, co-sleeping isn't for everyone but it was definitely for me. If you're anything like me, co-sleeping with your first kid vs. your second demonstrates a stark difference in attitude, practice, and your desire to give literally any f*cks whatsoever.

I started off co-sleeping by accident. We shared a room with my first child, which is one kind of co-sleeping, but I was determined not to cross the line into bed-sharing. But one night, after I'd already woken up about three times in five hours to feed my son, I was so tired I just brought him into bed with me. "I'll just feed him here instead of in the chair and then put him back," I thought. Before I knew it, though, I opened my eyes and it was morning. My baby slept longer next to me than he ever had in his life. I was awestruck and, more importantly, rested.

As you can imagine, waving the possibility of sleep in front of a new mother can have the power to change her mind about even her strongest opinions. Within a week, it became clear that this was not a temporary fluke: we were officially bed-sharing co-sleepers. By the time my second baby came around, there was no question that she would stay in our bed her first night home.

But it's not just the decision itself that's difference. Turns out, experience can mark a lot of significant changes overall as well.