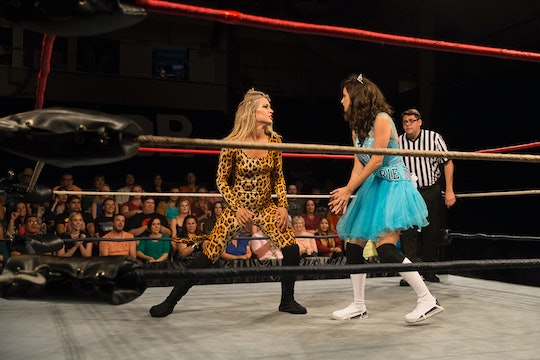 This Could Be What Gets Krystal Eliminated On 'The Bachelor'

On The Bachelor franchise, there's usually a "villain," and this season I think producers tricked viewers in the beginning. I was led on to think it was Chelsea, but really... it's Krystal, and it seems she's about to get on the wrong side of the Bachelor himself, at least according to next week's promo. So what did Krystal say about Arie on The Bachelor? It could be what finally sends her home.

During the premiere, Krystal seemed pretty innocuous. She actually has a tragic backstory: she revealed that her younger brother is currently homeless and living on the streets. Krystal seemed like a free-loving person, working as a fitness coach and making workout videos in her spare time. Over time, though, her true self showed (or should I say, the producers' edit showed), and next week she may be eliminated for her behavior.

During the premiere of The Bachelor, many — myself included — predicted that Chelsea was this season's "villain." Why? Because during the first night she went to talk to Arie twice. It seems ridiculous now considering how Krystal's acting, but yes, Chelsea was giving off villain vibes because she "stole" Arie while other contestants haven't gotten a chance to talk with him. Krystal, though, has done that and more. Last week, Krystal caused some drama when she went to talk to Arie before a rose ceremony when she already had a rose from a one-on-one date... and that was just the beginning.

This week, though, it was further confirmed that Krystal is not here to make friends. Besides trash talking all the other contestants during confessionals, she seemed to forget that she's on The Bachelor, where her boyfriend also has 20 other girlfriends. She insists that she and Arie will end up together and acts rude to everyone else. Going into the rose ceremony, she panicked when Chris Harrison announced that there wasn't going to be a cocktail party beforehand. That meant that Krystal wouldn't have time to talk to Arie before the rose ceremony, so she just accepted it and let it happen.

Just kidding, quite the opposite: she stopped the rose ceremony to talk to Arie about where they were at. Ugh. While some contestants thought this was the end for her, it was not. Krystal did, however, receive the last rose — which is usually not a good sign. Krystal is probably toeing the line with Arie at this point, but he doesn't want to eliminate her yet. In my opinion, he definitely should've; I'm not one for contestants talking trash about each other. This is 2018, there's no room for women hate even on The Bachelor shows. Despite this, though, I have no say in Arie's poor decision making so that was that.

From the preview for next week, though, it seems that Krystal's time on the show may be coming to an end. She has no friends at this point, but next week that escalates even more so. She apparently claims she's not going to participate in something — maybe a group date, maybe a cocktail party, maybe a rose ceremony — which makes me question why she's even here.

Then, the trailer shows Arie pissed off, presumably at something Krystal says. What does she tell him? I don't have the answers, but I presume she finally blows and says something rude about him. Maybe it's about how he's wasting his time on the other contestants, or that he's not even worth the trouble. Whatever it turns out to be, it probably won't bode well for Krystal. How she's portrayed on the show, just like everything else in Bachelor Nation, is heavily edited, so viewers should take it with a grain of salt — but this season's "villain" may be going home soon regardless.