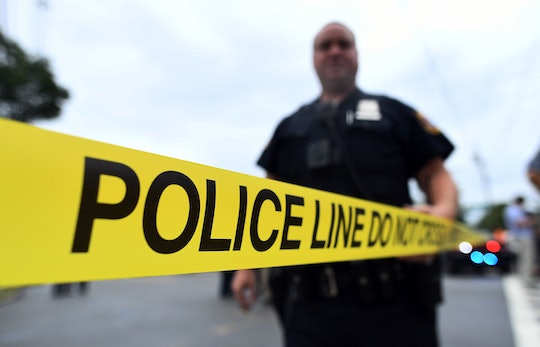 What Did The Chelsea Bomber's Note Say? The Message Isn't As Straightforward As It Seems

Luckily, despite all the chaos that surrounded it and the media frenzy it caused, the bombings in New York City this weekend were pretty minor and no one was fatally injured. But the alleged Chelsea bomber's note, which was found with one of the devices is pretty chilling and warns New Yorkers (and Americans everywhere) that this isn't the end of violence. In addition to a random 911 call on Saturday night where the caller said, "there will be more," according to the New York Post, authorities also found a handwritten note in a plastic bag where the undetonated West 27th Street bomb was found. Part of it is in Arabic and it vows, like the unidentified male voice on the 911 call, that more bombings are on the way.

In addition to the recently discovered note, there is also a Tumblr page being investigated by the New York Police Department that claims to be a sort of manifesto for the "New York Bomber." Officials haven't confirmed that it belongs to the main suspect in the explosions, Ahmad Khan Rahami, who was taken into custody after a shootout in Linden, New Jersey Monday afternoon. The Tumblr page, which was taken down on Sunday afternoon, allegedly read “I did it because I cannot stand society. I cannot live in a world where homosexuals like myself as well as the rest of the LGBTQ+ community are looked down upon by society.”

The Tumblr page might have been bogus, but the handwritten note is real. Prosecutors have charged Rahami with five counts of attempted murder of a law enforcement officer, tied to the shootout earlier Monday with officers, though the Linden authorities were shot, they were not fatally wounded. The bail for those charges has been set at $5.2 million.

The FBI is expected to charge Rahami with counts of terrorism in the coming days, according to NBC News, for his alleged involvement. Rahami is suspected to be behind the New York bombing, including the undetonated device found later, and the bombing on Saturday at Seaside Park, in New Jersey. There were no casualties in either bombing.

The contents of the note haven't been released to the public, presumably because they are being studied to decipher Rahami's motive. The FBI has said that Rahami, an Afghanistan-born U.S. citizen, doesn't seem to have been working with a larger terrorist cell. ISIS has not claimed responsibility for inspiring the Chelsea bomber either, though they did claim to stand behind Dahir Adan, the Somali college student who went on a stabbing rampage at a Minnesota mall on Saturday, in a separate incident.

At this point in the investigation, it doesn't seem like Rahami was all that organized or had allegedly planned too far ahead — he was spotted sleeping in a vestibule of a bar in New Jersey just before he was apprehended — so the contents of his alleged note are bound to give some insight into what he may have reportedly been up to.