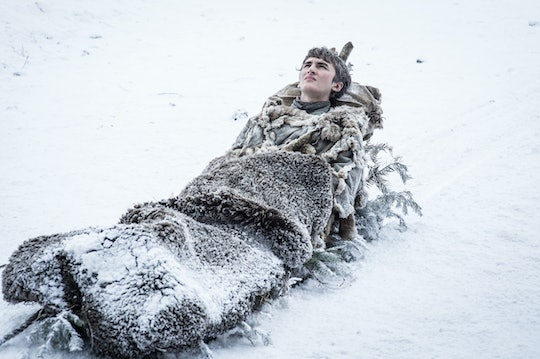 Bran's Visions Are Impressive But Terrifying On 'GoT'

Game of Thrones kicked off Season 7 with a bold cold open — the first in recent memory — involving Arya-as-Walder-Frey poisoning every last member of House Frey in retaliation for the Red Wedding. After the opening-credits-as-usual, viewers were treated to a terrifying, long shot of White Walkers and their army of undead marching across some snowy plains. The next scene showed Bran exiting a warg, implying the previous scene was a vision. But what do Bran's visions mean on Game of Thrones? Unfortunately, since his unsupervised, free-range warging ended in tragedy last season (ie., the destruction of the three-eyed raven), neither viewers, nor Bran, have a great handle on what the visions mean and why he ultimately has this gift.

Sometimes the visions are because Bran has warged into another creature and is seeing the world through their eyes. He had this connection with his direwolf Summer before he died. Sometimes, the visions are flashes of the past. Last season, we discovered Hodor's backstory, Jon Snow's parentage, and that Children of the Forest saved Benjen from turning into a wight using dragonglass — all through Bran's flashback visions. But sometimes, Bran's visions are glimpses into the future. He saw Cersei's wildfire massacre at the Sept of Baylor before it happened while warging, for example.

This might be a stretch, but Vanity Fair speculates that Bran's vision of the White Walkers might be a glimpse into the future, rather than the present:

If you look closely, it looks to me as though the Night King and his crew (including giants!) are marching on green grass that turns to snow as they cross it. As Jon put it last season: “The true enemy won’t wait out the storm. He brings the storm.” That green means they are south of the Wall. But the White Walkers have never been south of the Wall before. They may even be south of snowy Winterfell in this green-grass vision.

If that's true, then the living's centuries-old protection against the undead, The Wall, has failed. This could have happened one of a few different ways. It's possible someone blew the Horn of Winter, which we see Samwell Tarly discover in Benjen's hidden treasure. Legend has it that blowing the Horn of Winter brings down The Wall, which would be a very TV series-friendly visual spectacle. But it's also possible that letting Bran south of the wall once he's been touched by the Night King's mark somehow undermines The Wall's magical protective properties. Let's hope it's the first one, because literally so many terrible things are Bran's fault at this point that it would be kinder to spare him even more accountability.

Maybe someday Bran's visions will be of a happy nature, but for now they mostly consist of the looming battle we've all been anticipating.