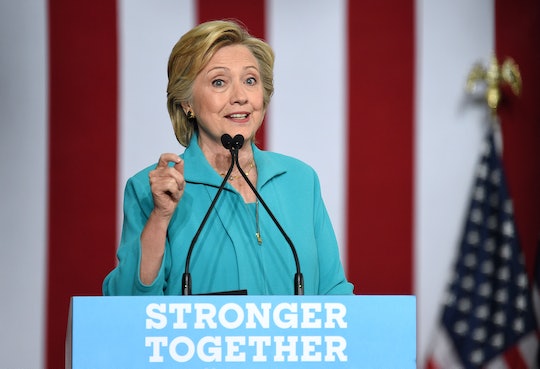 What Do The FBI’s Hillary Clinton Notes Say? She Had Lots Of Phones, Let's All Freak Out

Are those sleigh bells I hear? Because Christmas just came early for Bernie Bros and Hillary Haters. The FBI's files on the Hillary Clinton email case were released on Friday afternoon, providing everyone with some great beach reading for the unofficial last weekend of the summer. Obviously there's nothing damning in there, since the FBI declined to file any charges when it concluded its investigation in July, but that doesn't matter, because a truly passionate conspiracy theorist can always bend the facts to suit their argument.

According to the report, Clinton maintained that she used her own email server while serving as Secretary of State for the sake of convenience, and nobody ever raised any concern to her regarding impropriety. She also said that she couldn't recall ever sending or receiving any classified emails through her server. This is "largely consistent with what she has said publicly about the email controversy in recent weeks," according to The New York Times, but I predict that somehow, some way, the documents will be used to "prove" that Clinton's a liar and a criminal, because once you see someone as a villain, it's hard to change your point of view. Let's just pop over to Twitter and see... Yup!

Clinton did not lose 13 phones. This is a reaction to some news organizations' very right-wing spin on a few phrases lifted from pages eight and nine of a painfully unsearchable 47-page report, where the FBI stated that it initially identified 13 mobile devices that could potentially have been used to send emails by Clinton. Further investigation revealed that eight were actually used during her tenure as Secretary of State. Clinton would replace older (password-protected) BlackBerries with newer versions when they malfunctioned, as one does, and her aides would then dispose of the old SIM cards. Also, "the whereabouts of Clinton's devices would frequently become unknown once she transitioned to a new device." Hey, real quick, do you know where all your old, wiped phones are? Yeah, me neither. But if you hate Hillary Clinton, you'll see things very differently. Anyone else?

Wow, everybody's really obsessed with these 13 devices that they clearly didn't read about in the actual FBI report, huh? A direct quote, and please scroll to page eight and read it if you don't believe me:

And yes, even eight does sound like a lot of phones to your average person who's on a "New Every Two" plan, or has to spend a week or two's pay to upgrade their smartphone. But as Secretary of State, Clinton's BlackBerry was essential, so if it started acting up, she didn't have time for that nonsense, and she'd replace it. She could afford it. And while I don't personally have any experience with that particular brand, I will remind everyone that Kim Kardashian famously kept a drawer full of replacements for when her BlackBerries died, so maybe they just don't last that long? Someone get Kim on the line and ask her how many she goes through in four years. Are we done with this now?