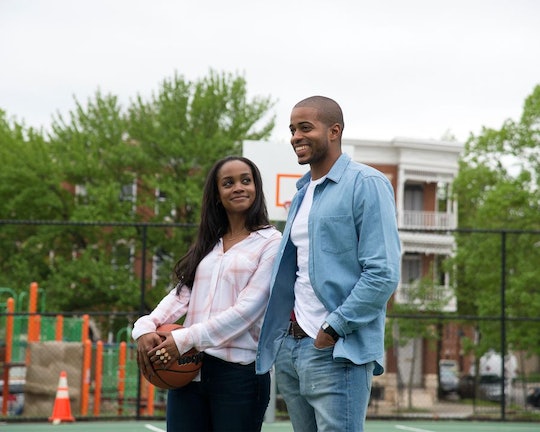 Eric Has No Regrets About 'The Bachelorette'

Early on in the season, Eric didn't really seem like a strong contender for Rachel's heart. In fact, he seemed to do a lot more complaining than anything else about one thing or another. But after he finally got the chance to connect with Rachel, Eric did a total 180 and has easily become one of the sweetest guys this season who totally deserves to get that final rose. That being said, now that filming is over, what does Eric think about The Bachelorette?

He seems to really cherish the experience he had, regardless of whether or not he ends up winning in the end. In a recent interview with The Baltimore Sun, Eric opened up about his rough childhood and growing up in Baltimore, but he also touched on The Bachelorette, as much as he could without giving anything away. "I was open to it, I took advantage of it, and the rest is history," Eric said about going on the show.

But since history has yet to present itself to Bachelorette audiences, the possibility of Eric making it past hometowns hasn’t yet been revealed. Despite any possible previous reservations he may have had about the show, Eric seems to be more excited than anything else about having had the experience and feels that it was well worth the effort.

In June, Eric spoke to TMZ about his time on The Bachelorette and who Rachel picks in the end. "I think, at the end of the day, she has to pick the person who she’s fallen for, who she’s in love with," he said. He also emphasized the pressure of finding love on reality TV and how much pressure Rachel endured when finding her own love on The Bachelorette. "Is it pressure? Yeah, you’re on TV, of course there’s pressure," he added. "That’s just human nature… Love is love, so she’s gonna follow her heart and that’s what people are seeing."

And on Eric’s Instagram, he’s been so open and grateful for the experience he had on The Bachelorette. On a photo of himself and Rachel together, he wrote in the caption: "The moment when nothing else matters but the love, connection and affection you share with the most beautiful person in the world" and ended it with an exclamation of "THE LOVE IS REAL!"

He also recently posted a shout out to the other three remaining men of The Bachelorette Season 13, so even if he doesn’t leave the season with a fiancée, he seems to have no regrets about the experience in general. The personal trainer and motivational speaker seems humbled to have been able to go on the show at all, regardless of what The Bachelorette end results are for this season.