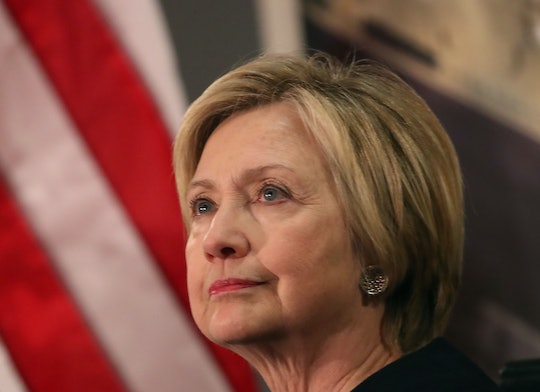 President-elect Donald Trump has brought up former Secretary of State and Democratic presidential nominee Hillary Clinton a few times during his contentious Wednesday press conference. So what does Clinton think of Trump's press conference? She hasn't issued a statement for now but likely will given how Trump specifically targeted her while answering questions.

When asked about the Russia hacking scandal, Trump dodged the question in part by diverting the focus to Clinton and the Democratic National Committee's leaked emails. First, he claimed that if Russia "had broken into the Republican National Committee," the hackers would have released the RNC emails "just like they did about Hillary." He then went on to feign concern for "all of the horrible things that her people" — namely John Podesta, her former 2016 campaign chairman — "said about her." "If somebody said about me what Podesta said about Hillary, I was the boss, I would have fired him immediately," Trump told the press, without a sense of irony. "Because what he said about her was horrible."

Concern quickly turned to incrimination, though. As proof that "hacking's bad," Trump rehashed the controversy around debate questions leaked to Clinton's camp, calling it a "horrible thing." He then accused the press of burying the story and not holding Clinton accountable (a quick Google search, by the way, will tell you that's a lie). And, as he so often does, Trump, speaking in the third person, went on to play the victim, claiming that if he got to the debate questions, "it would be the biggest story in the history of stories" and he would have been pressured to drop out of the race "immediately."

While Trump avoided answering the question substantially, Trump also didn't fully condemn Russia or President Vladmir Putin's alleged role in helping him win the U.S. presidency. If Putin "likes" him, Trump said, he would consider that "an asset, not a liability." After all, America has a "horrible relationship" with the Eastern European country, he continued, and we need to amend that because "Russia can help us fight ISIS." Still, Trump said he doesn't know if he'll "get along" with Putin (he hopes he will, though), but if not, he asked the crowd, "Do you honestly believe that Hillary would be tougher on Putin than me?" Apparently not, according to Trump. (Unfortunately, we won't actually know.)

Although Clinton has yet to release a statement about Wednesday's press conference, she did subtly scold Trump during at speech at the opening of the State Department museum — one of her first public appearances since losing the election. In an address focused on diplomacy, Clinton criticized — but never named — Trump for his interactions with world leaders in the days since the election, according to CNBC.