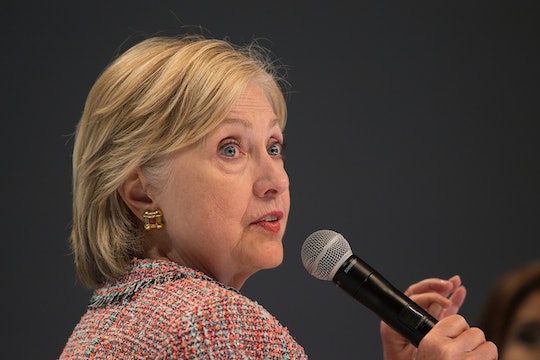 What Does The Clinton Email Decision Mean For Her Campaign? It's Not A Time To Celebrate

Former Secretary of State Hillary Clinton won't be charged criminally for the scandal surrounding her use of a personal email server during her time with the State Department. So what does the Clinton email decision mean for her campaign? While she's not on the hook for criminal wrongdoing, the damage to her campaign has been real, and will likely be lasting.

On Tuesday, FBI Director James Comey held a press conference announcing that, although Clinton was "extremely careless... our judgement is that no reasonable prosecutor would bring such a case," and therefore he would not recommend that the Justice Department bring criminal charges.

But this is hardly a time for the Clinton campaign to breathe a sigh of relief. The recommendation from Comey comes just days after a secretive meeting at the Phoenix airport tarmac between Clinton's husband, former President Bill Clinton, and Attorney General Loretta Lynch, who will ultimately decide whether Clinton will face charges of mishandling classified information. Lynch told the Washington Post the conversation was just a friendly discussion about grandchildren and golf, but no one denied it looked bad for everyone involved.

Lynch told the Washington Post she would "be accepting" the recommendation from Comey regardless of the outcome of the FBI investigation:

The fact that the meeting that I had is now casting a shadow over how people are going to view that work is something that I take seriously, and deeply and painfully.

So while Clinton isn't going to be charged with a crime, the shadow cast over the investigation by her husband's meeting with the Attorney General, coupled with the harsh criticisms leveled at her decisions by Comey, her campaign will have to work hard to overcome the damage.

A poll from June 1 from Morning Consult said 85 percent of respondents knew something about Clinton's use of a private email, and only 20 percent believed it was an "ethical" practice. Almost half saw the emails as a "major problem" for Clinton's candidacy.

As for Clinton, she's trying to soldier on through the scandal and, while she said she "would do it differently" if she could go back in time, according to ABC News, she maintained she did nothing wrong. Additionally, she said her email arrangement was similar to that of previous Secretaries of State who served before her — a fact she said is substantiated by a report from the State Department's Office of Inspector General.

This report makes clear that personal email use was the practice for other secretaries of state. It was allowed. And the rules have been clarified since I left.

It will be up to voters to determine for themselves if the Clinton email server scandal is enough to cost her their vote in the upcoming election.