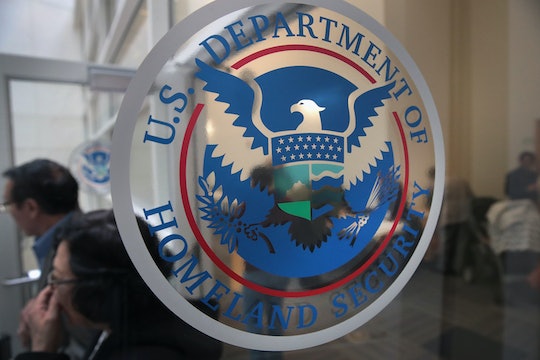 What Does The DHS Report Say About Trump's Order?

In the beginning of February, Trump's original immigration order — which he instated in late January — was put on hold by a federal judge, according to The New York Times. This allowed for travel from these countries to be reinstated and allowed "vetted refugees from all countries" to enter the United States. This was excellent news — and meant that if Trump continued to push for the legality of the order, the case could be put in front of the Supreme Court. In the time since then, travel has been freely allowed from the countries listed in the order — Iraq, Syria, Iran, Sudan, Libya, Somalia, and Yemen. The draft of the DHS report could echo that good news. According to The Associated Press, a draft of the DHS report echoes what the federal judge had stated in his ruling — that insufficient evidence that citizens of those seven countries pose a threat to the United States.

According to The Associated Press, a draft that was obtained by the Associated Press stated that "citizenship is an 'unlikely indicator' of terrorism threats to the United States and that few people from the countries Trump listed in his immigration order have carried out terror attacks or been involved in terrorism-related activities in the United States since Syria's civil war started in 2011." According to CNN, it is important to note that this draft "does not include data from other intelligence sources." But what this early draft of this DHS report states is nothing new — people have been arguing this since Trump enacted the order.

But will it have an effect the immigration order? It really all depends on the final DHS report and the new immigration order. Currently, the Trump administration is working on a "new version" of the immigration order, which could "withstand legal challenges," according to The Associated Press, which could debut at any point next week, according to CNN. The new, revised travel order has been promised to "protect" the people — and will clarify points of confusion that the first travel plan had, according to CNN. According to Business Insider, the new order could go into effect immediately when it is re-introduced — but it is "almost certain" that the courts will challenge it. And if the old order is successfully rescinded, according to Business Insider, the lawsuits challenging it (including the federal court ruling) would be "effectively nullified."

The draft DHS report does support the argument that everyone has been making — that immigrants from the seven Muslim-majority companies don't pose much of a threat, because they haven't in the past few years. However, it is unclear how Trump's re-written immigration order will be effected by it, once the new order is signed in the upcoming weeks.