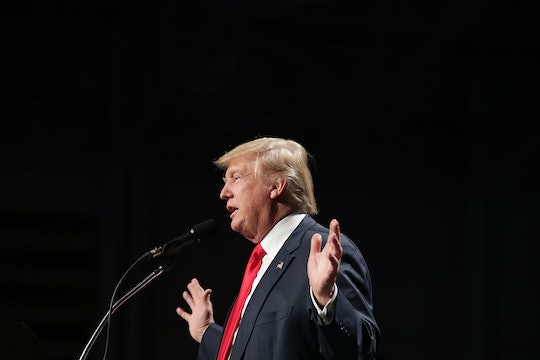 What Does The FBI Know About Donald Trump's Alleged Russian Connections? Not Much

In any normal United States election, the FBI does not play a starring role in the final week before voting. But this is no normal election, and since FBI Director James Comey made his bombshell announcement about further investigation into the never-ending Hillary Clinton email saga on Friday, many have been clamoring to hear exactly what the FBI knows about Donald Trump's alleged Russian connections. So far, the answer appears to be "not much."

Over the past few months, the FBI has allegedly opened multiple investigations into possible connections between Russia and Trump (or, more generally, Trump's campaign and backers). And yet, according to multiple sources, so far, the agency has failed to turn up conclusive evidence linking Trump to criminal activity involving Russia. (A reminder that, despite the chants of "Lock her up" swelling at pro-Trump rallies, the FBI has also failed to turn up any evidence linking to Clinton to criminal activity.) Still, unlike with the Clinton investigation, the FBI has not made official statements about how all the Trump/Russia research is going, despite recent Democrat accusations of favoritism, so it's hard to say exactly what the FBI knows about the situation.

But there are unofficial reports of what, specifically, the FBI has been investigating, and how it reflects on Trump.

CNN reported that the FBI has been looking into former Trump campaign chairman Paul Manafort and his past lobbying on behalf of Vladimir Putin's government, although any ties there would not necessarily implicate Trump.

The FBI has also been looking into the computer hacks that have resulted in WikiLeaks email dumps from within the DNC and the Clinton campaign. The Obama administration and others have blamed Russia for the hacks, and the FBI has allegedly been investigating whether or not the hacks are intended to sway the election in Trump's favor. (Trump, after all, has been much more complimentary of Putin than Clinton has, and did make that remark encouraging Russia to hack his opponent, which he later claimed was a joke.) Yet, according to The New York Times,

[Investigators] have become increasingly confident, based on the evidence they have uncovered, that Russia’s direct goal is not to support the election of Mr. Trump, as many Democrats have asserted, but rather to disrupt the integrity of the political system and undermine America’s standing in the world more broadly.

And, strangely, a server registered to a Trump organization allegedly communicated multiple times with a Russian bank, although the same intelligence officials speaking with the Times asserted that the activity between the two could have been spam or marketing emails, and many news outlets have since cast doubt on the significance of the link.

So it's entirely possible that the FBI has no "explosive information" on Trump's ties to Russia, as Senate Minority Leader Harry Reid controversially asserted in an open letter to Comey. Still, that doesn't change the fact that there appears to be a double standard in the way the FBI has communicated with the public about its investigations of Trump, versus its investigations of Clinton.