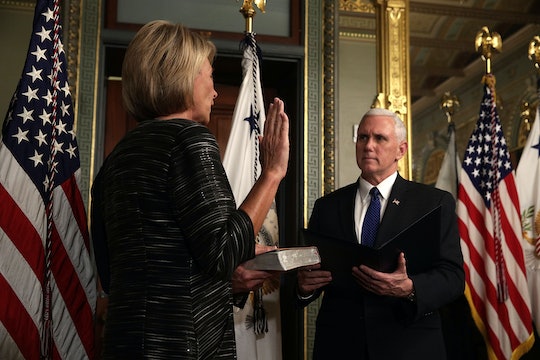 What Does The Secretary Of Education Do?

Following what was arguably the most contentious cabinet nomination in U.S. history, Betsy DeVos, a billionaire with no experience in education, has been confirmed as secretary of the agency she's long advocated against. Many people (DeVos among them, perhaps) are now wondering, just what does the secretary of education do? Will DeVos be free to completely dismantle the Department of Education? The good news is that it's actually one of the least powerful cabinet positions, but DeVos could still wreak havoc during her appointment.

The main duties of the Department are to advise and enact policy, collect data, administer funding, and handle discrimination complaints regarding education. The main concerns for DeVos appear to be K-12 policy and funding; she's a longtime proponent of voucher systems that theoretically enable students to use federal funds to pay for the school of their choice. In practice, however, the vouchers don't completely cover the cost of private education, and instead merely subsidize private and religious school tuition for wealthy students. What that means, is that those who are unable to spend thousands of dollars on tuition have no choice but to attend public schools depleted of the little resources they were once afforded. DeVos is also an advocate of for-profit charter schools, like those in her home state of Michigan, which turn out critically low test scores.

Another concern is that DeVos would be handling the increasingly common discrimination claims from transgender students. Although DeVos claimed during her confirmation hearing that she "fully embrace[s] equality," several foundations run by her family have donated hundreds of thousands of dollars to anti-LGBTQ groups. Some of these funds came from the Edgar and Elsa Prince Foundation, of which DeVos herself was listed as vice president for 13 years. DeVos has said that this was a clerical error, according to The Advocate.

DeVos will also be in charge of upholding the Individuals with Disabilities Education Act, which she may or may not have heard of, and the Obama Administration policy governing colleges' responses to sexual assault. DeVos has donated at least $10,000 to a group aimed at overturning the policy, but during her hearing, she declined to take any sort of position on the issue of campus sexual assault. She has said strikingly little in regards to her views on higher education in general, instead speaking out on the dangers of grizzly bears in elementary schools. Let's hope that the main focus of DeVos, who received more no votes than every previous education secretary combined, is educating herself.