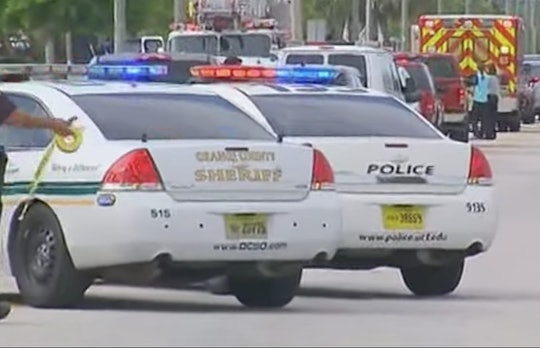 What Happened In Orlando?

"Orlando" trended on Twitter on Monday, and whenever something is trending, it's usually because of either a very good or very bad thing. So what happened in Orlando on Monday morning? Unfortunately, a workplace shooting has the city on edge, and although the incident appeared to be over pretty quickly, it's still a tragedy that deserves discussion.

According to ABC News, five people were shot and killed by a former employee at a workplace near Orlando, Florida, Monday morning. The event happened three years after the suspect was reportedly involved in another violent episode there, the outlet reported.

USA Today reported that the 45-year-old "disgruntled" former employee of a RV accessory business fatally shot five people before killing himself. The Orlando shooter had been fired in April, according to that publication. It is not yet clear whether there was any other motive for the shooting, other than possibly the shooter's firing a few months back.

Orlando Weekly reported that when deputies arrived at the scene, they found three men and one woman dead. One other man was taken to Orlando Regional Medical Center, and he later died there. They confirmed that the shooter was the subject of a violent workplace incident in 2014.

CNN reported that the shooter had a "minor police record," and no association with any terrorist group, according to Orange County Sheriff Jerry Demings. Demings stated that the active shooting was reported at about 8:03 a.m., and deputies arrived at the scene just minutes later.

USA Today noted that the shooting took place almost a year after the Pulse nightclub massacre. In that incident, a gunman entered the venue and killed 49 people. Several others were wounded before he was fatally shot by police. So it's understandable that the city is on edge with this latest incident, as the memory of that event looms large with the anniversary of the tragedy fast approaching.

Thankfully, Demings confirmed that seven people inside the business survived the tragedy and are being interviewed, according to ABC News. He also reported that the shooter had both a handgun and a knife when he died.

The shooting is just the latest multiple-casualty shooting in the city since the Pulse massacre, according to the Twitter account of Gun Violence Archive, a "a not for profit corporation formed in 2013 to provide free online public access to accurate information about gun-related violence in the United States." And it came on the heels of a much-criticized tweet by President Donald Trump in regards to the London Bridge attack in London. Trump tweeted Sunday morning, "Do you notice we are not having a gun debate right now? That's because they used knives and a truck!"

But with this latest gun violence incident in Orlando, it's clear that the "gun debate" is one that the United States will continue to deal with. As Sheriff Demings stated, the shooter in this incident was not a "member of any subversive type of organization,” and there is "no indication that this subject is a participant in a terror-like organization," according to Orlando Weekly.

He was just a regular guy, who's been the subject of a violent incident at the same workplace before, and who had access to a gun and used it against his former co-workers.

A tweet posted by The Trace, which reports on information and analysis regarding guns in America, reported that, according to the Federal Bureau of Investigation, 45 percent of active shootings happen at businesses. The incident in Orlando is a tragic example of that statistic.

Unfortunately, as long as there's just a "gun debate" going on in the United States, and not enough actual proactive measures being taken to prevent gun violence, the shooting in Orlando will likely not be the last example of a workplace shooting that had the potential to be prevented through stricter legislation, regulation, and gun control.